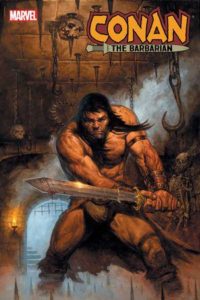 Jim Zub returns to the pulp fantasy world of Conan and launches a new story arc in Conan #13. Zub’s familiarity with Conan and his world is apparent as he eases readers into Conan’s thoughts, demeanor, physicality. Zub begins with Conan’s desire for beer, women, and physical prowess, but quickly subverts those genre expectations by thrusting Conan into a foreign setting unable to understand the language and the implications of his actions.

After the challenges endured during Jason Aaron’s run on the title, Conan is seeking some rest and relaxation in a new land. This rest is short-lived as Conan is deemed worthy to participate in the village’s trials to honor their god. The trials are not a series of feats that play to the pulp machismo of the character, rather they appear to be a labyrinth of physical and mental tests to endure with a cohort of combatants. The trials are presented not as a fight to the death, but a journey of survival. 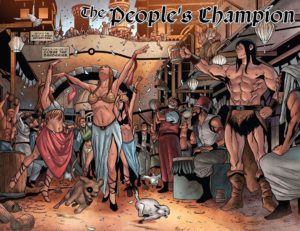 This framing shifts Conan from a solo warrior to a shared unwilling sacrifice. Zub has set the stage to explore Conan as a collaborator and compatriot with others trying to survive the trials. The warriors in the trials along with Conan provide different perspectives and result in ways for Zub to explore Conan as a character. The inclusion of a local translator, who Conan dragged into the trials, provides a narrative device for Zub to reveal the meaning behind the ritual trials and serve as a lens to convey fear and humility not frequently associated with the mighty fantasy character.

The cliffhanger ending and new setting result in an attack on Conan’s mind and soul, more than his body. This mindful approach to a physical character creates a story arc that transcends expectations, engages new readers, and builds on the character’s long history.