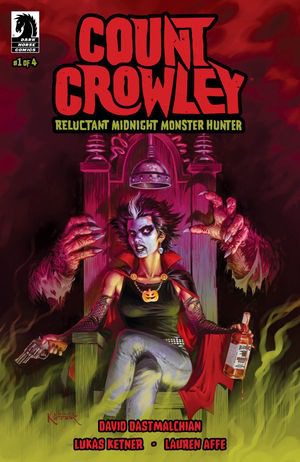 It’s October. It’s prime time for spookage here at Geeks World Wide, so what’s better than a horror comic? I’ve found myself reading some classic horror comics in my day, like “Creepy,” or “Creepshow,” so it was refreshing to see a modern comic emulating the old style, including a creepy horror host!

A woman spiraling into depression gets a last chance at a job, thanks to her brother/ boss at the news station. It’s not reporting the news, but a new horror host for bad B-movies. Remember those cool days? I know Svengoolie is still around…

The main character soon finds herself face to face with a werewolf. What in the world did she get herself into? I don’t know! It’s only 1 of 4!

The art style has a more classic feel, meaning, it resembles more of the comics of past, than the comics of now. The colors are not too bright, but not muted, which is relaxing on the eye considering the action taking place.

I was thrilled to see a classic style horror comic in the era of blood, gore, and just in-your-face slasher horror. I cannot wait to read the rest of this series… especially with Friar Fear (I hope this is an ongoing series with this guy; let’s bring back creepy horror comic hosts!!).