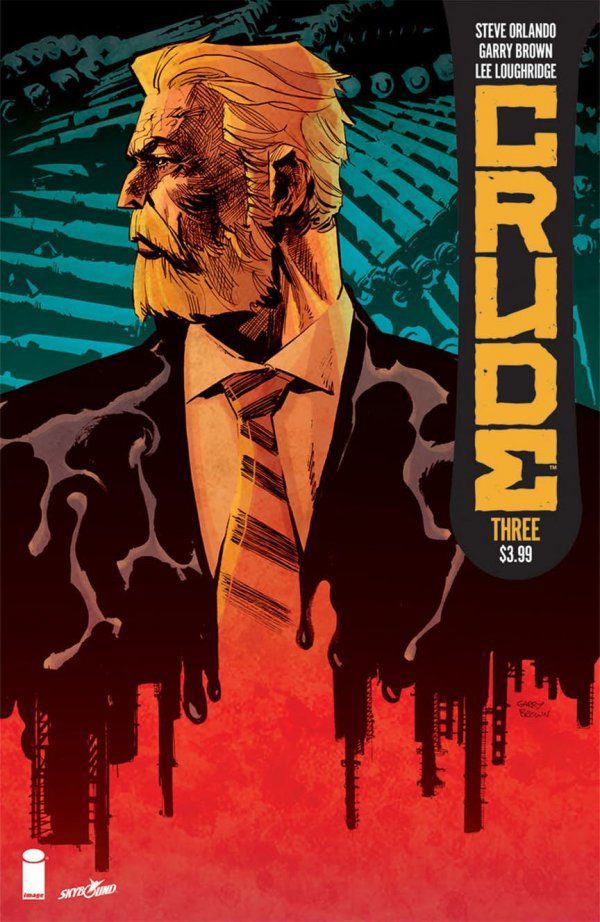 Piotr is fitting in very well as he continues his investigation into his son’s death in Blackstone. The new issue of Crude dives into some of the more political aspects of the land as we learn about the two opposing sides trying to gain control all over Blackstone. But Piotr is not interested in any of that. Even though it serves no personal gain for him, it’s still a great side story for the reader so we can see exactly how crazy things are at Blackstone with all of its corruption. One of the best things about Piotr that I find is that his methods can be either very subtle or downright brutal. This man literally threw himself in front of a crowd when he arrived and no one is able to recognize him. Anyway, you make of it, he’s smart in his actions regardless of how loud they may be. You’re also really seeing how this place is messing with Piotr’s mind as he can’t figure out what is it that made his son come here.

What kind of life was it that seemed so worth it to come to Blackstone? All of this is rushing around in his head as he’s seemingly carrying the weight of his son’s death as if he feels completely responsible for it. Even though we barely have an idea of how he raised his son, we don’t know what it really was that set them apart. None of that matters though because Piotr knows that his son was killed and he will go to any lengths to find out how and why. This motivation just shows how important his son was to him, even when they were barely on speaking terms. Piotr may be a violent man due to his job, but he really does care about the family he has in his life.

The art team here is doing a well-done job bringing out the gristle in this series. No one is happy here in Blackstone but continue to do what they can with some reasons simply due to greed. I do believe some of the best panels here though are any sort of close-ups on our characters.   You really see how rough everyone looks and it’s great when you see just how angry Piotr is, as he seems to get closer to his answers. Crude is a very vulgar series but the in-focus here has so much heart behind all the blood and violence that is spilled that you care about him finding peace in this whole situation. This continues to be a surprise find as far as any of Image’s recently published series.