Cthulhu Wars from Peterson Games, exploded onto the scene in 2013 with a highly successful Kick Starter resulting in a very well received and incredibly fun game to back it up. The game was always on many gaming websites “hot list” and many retail sites “out of stock” list. With a solid strategy game and some of the best miniatures (which puts it lightly) in gaming, Cthulhu Wars earned many nominations on podcast and websites for “board game of the year”! A second Kick Starter (Onslaught Two) in 2016 saw the game topple the 1 million dollar mark. In doing so, added were new factions, maps, add-ons, and yes, an insane amount of new gorgeous miniatures. Almost 40 stretch goals were also hit! The game didn’t slow down and the new releases only fueled the fanfare. Now, Onslaught Three is live on Kick Starter now, and you shouldn’t miss your chance to jump on board now! (Don’t literally jump on your board.) 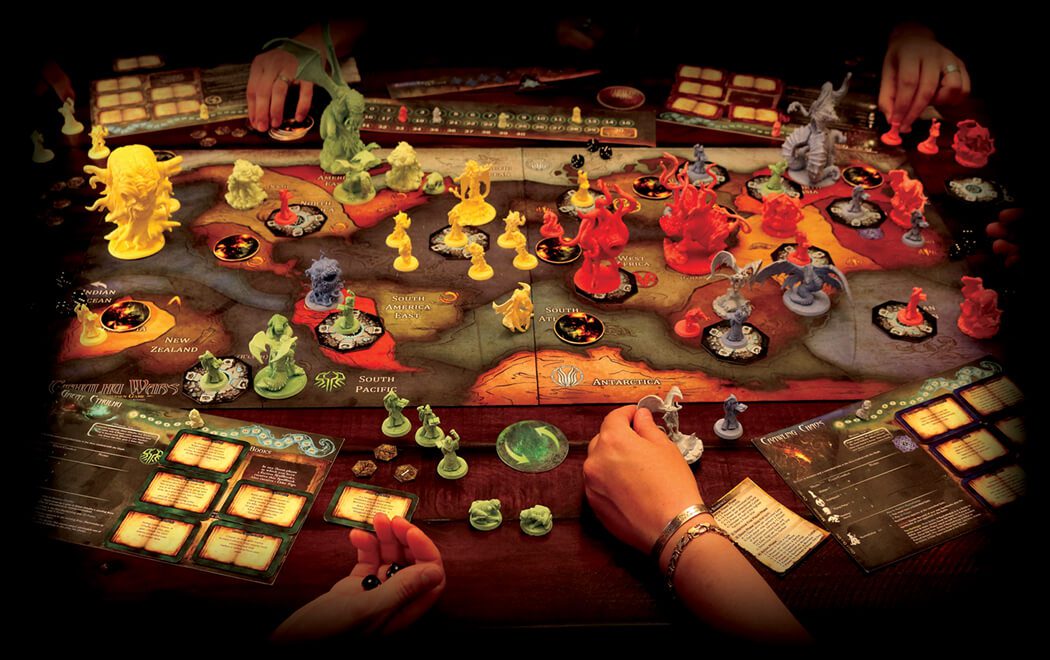 Cthulhu Wars is a strategy board game in which the players take the part of alien races and gods taken from the Cthulhu mythos created by H. P. Lovecraft. The game is physically large, and the base set includes over 60 miniatures of cultists, monsters, aliens, and Great Old Ones that range in height from approximately 20 mm to nearly 180 mm.

The game takes place on a map of Earth. Each player takes the part of one of four factions included in the base game. At the start of a turn, players Gather Power, then, during a series of Action Rounds, they spend this Power to accomplish various tasks, such as recruiting Cultists, moving units, engaging in battle, summoning monsters, building Gates, casting spells, and Awakening their Great Old One. When all players run out of Power, the Action phase ends and the next turn begins. Victory is determined by accumulating points on the Doom Track. The first player to 30 is the lone victor, but only if he has unlocked all six of spell books.

Driving the strategy are a player’s wish to expand his power base, and his need to accomplish six tasks to acquire his faction’s spell books. Each faction has a unique set of monsters, spell books, and special abilities, and has different requirements to acquire its spell books. All factions have multiple strategies open to them. Every game is different - as you play, you unlock new spell books, giving new amazing powers to each faction. Play is asymmetric - every faction has a unique set of rules and victory conditions.

The game plays 2 to 4 players (up to 8 with expansions). Despite the game’s depth, the length of play is usually around the 90-minute mark. If you’re wondering how drenched in theme this board game is, the designer, Sandy Peterson is also the author of The Call of Cthulhu role playing game, so you can expect a game that is steeped in the mythos. Hey, did I mention the miniatures? These things are incredible! They’re highly detailed, strong resin and … um, many of them are ginormous! What’s also great is that the miniatures can not only be painted, but they can be transported into many other games including several RPGs like Dungeons and Dragons. Just this past weekend I ran a Deadlands RPG session and used all miniatures from Cthulhu Wars in my story! 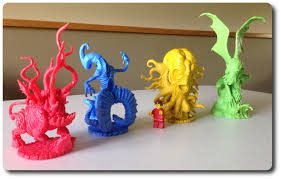 In the current campaign, you can get two all new factions, The Ancients and The Acolytes , plus a new map, new dice, and plenty of new bling, but of course, this is your chance to grab the base game, as well as most of the over 50 different add-ons and expansions from the first two Kick Starters. As of this article posting, the campaign has succeeded and is close to unlocking its 10th stretch goal! If you’re looking for more info and even some videos of game play, the Kick Starter page has plenty. You have until Monday, August 14th to make your pledge for Cthulhu Wars Onslaught 3!