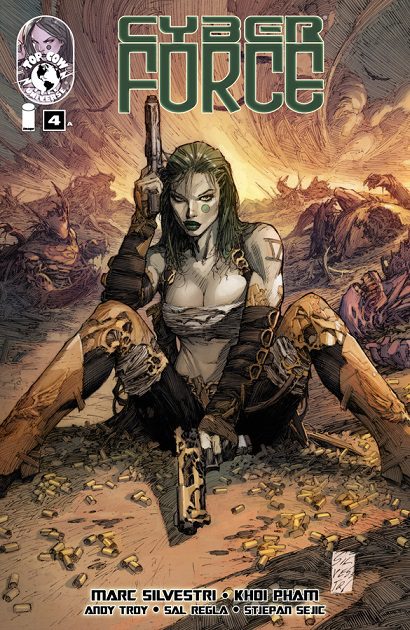 The new issue of Cyber Force has our enemies Aphrodite of the future and Killjoy finally make their moves to attack. Action hasn’t been something the series has been lacking but this issue steps it up with the way things escalate. The way it all ends too is going to set up how our main characters Carin, Morgan, and their Aphrodite will move forward from this attack. Even though Morgan doesn’t want to continue working for his employers at Cyberdata. He is willing to do what he can to make his daughter happy. I know Carin had nothing but all good intentions with what she is wanting to do, but she may be a bit ignorant of the company that claim’s to “help” her and perhaps one day we’ll see if they are truly taken advantage of or maybe someone of the company will step in to point them in the proper direction after what has happened in this issue.

The Aphrodite that Morgan and Carin have to work with is very stable and only has a few very specific functions that allow her to perform actions and even though Morgan doesn’t want to trust her and they have a discussion with her to assure he and Carin will be safe working with her. I think what he is trying to do is the best he can to act this all out until he can break him and Carin free. Even though the three of them were caught off guard during the attack, they were surprisingly able to work together very well and with that we get a few fun moments with the characters as they fight.

I love the art team on this book as all the expressions given from each of the characters are done so well. Carin can be shown as the bright but naïve girl that just wants to help. Morgan is fighting internal horrors while trying to keep a tough act going. Both of the Aphrodite’s have the look of an android where one is only set wanting to complete her programming while the other is out to complete a personal mission. Killjoy always has this fun and wild look in her face as you can see that she loves the fighting and destruction. I’m just always a fan of great facial expressions for characters that can really distinguish their personalities. By the end of the issue, everyone is just left in the dark and the future right now is looking grim for our team. Cyber Force has finally brought our team together and the adventure is really just beginning and it’s looking to be a wild ride.