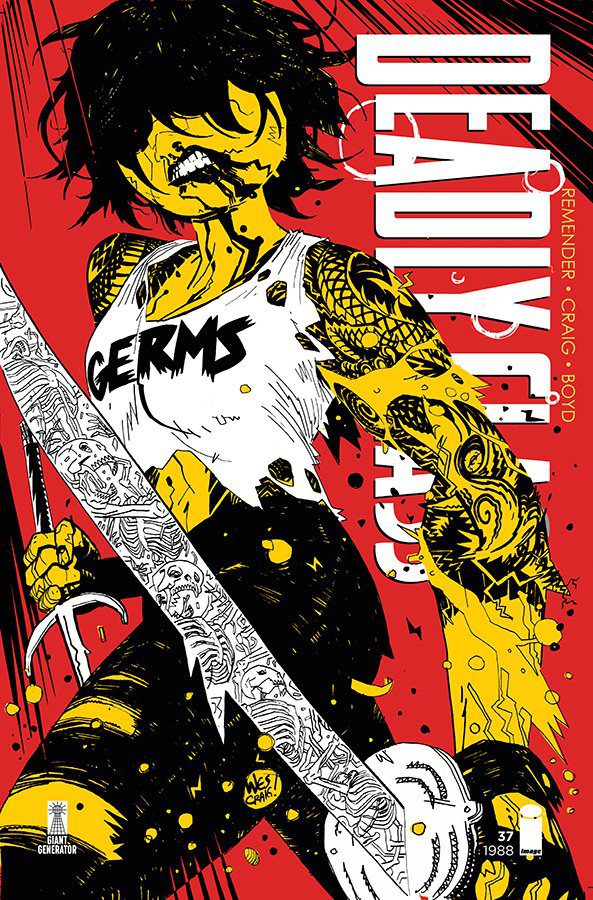 The new issue of Deadly Class is here and it’s finally taking us back to someone who we haven’t seen in quite a while now. Where the last issue left us leading to Marcus wanting to go back to King’s Dominion. This issue takes us to see what is happening with Saya.  Like many fans, I have been waiting to see what was going to happen to her and not only do we get to see her finally make a grand mistake, but she’s also getting some assistance from Quan. Which if you all remember, was pretty much responsible for what happened to everyone getting caught in the crossfire with Kenji’s gang. Before we get to the exciting escape sequence, we spend a bit of time with Kenji only to see how much more of a trashy person he is and what he’s willing to have his sister go through. Quan is shown severely regretting his decisions as he’s in a position so low that he much rather risk dying to get out of it all. I was finding myself just a bit on the edge because I was not only excited to read what was going to happen, but the way things play out just ends up taking you on quite a wild ride.

The chase sequence here is very high octane like something you would catch out of a Fast & Furious movie, just with a little more blood spilled. I also enjoyed a lot of the dark humor here, especially a certain moment with Quan. Seeing Saya take some charge again was also great to see as they make some death-defying stunts to get away from Kenji and everyone else trying to kill them. The illustration from places like the nightclub and panels where it shows just how extremely scared Saya and Quan are. Everything just felt like complete chaos inside of their heads and around them.  The coloring is still just wonderful, even though there are times where a lot of black is used. This to me helps make the rest of the colors really pop out, such as Saya’s tattoos and places like the nightclub. The way the paneling handles the action sequences are always a joy to read and continue to be some of the strongest points in the series, to the point where you swear some heads are about to fly out the issue. I do wish we could get more of those large letters that get really stylized with the font that Rus Wooton brings. It just looks like he’s having more fun with those but he’s still managing to make sure these words are flowing well while not blocking out any of the great pieces here in the panels.

Deadly Class feels like it’s really revving up towards the end as this issue is pushing to bring a character back. Hopefully, we’ll see the surviving members of the students finally brought back together soon. Until then, fans will at least enjoy seeing Saya again as she makes her way back with Quan to finally escape from her captivity.