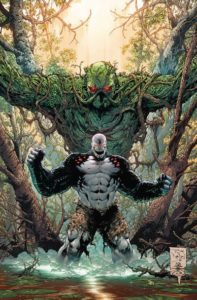 We’ve all heard the idiom “Don’t judge a book by it’s cover” and it may never ring more true than with Damage #6. Tony Daniel provides a truly stunning version of Swamp Thing that would make you petition DC to give him a gig on an ongoing. Then you turn to page one…

This story is titled Beauty and the Beast and is the conclusion to the Unnatural Disaster arc. The gist, Gorilla Grodd and Poison Ivy have teamed up to eradicate mankind. Ivy has created a Jungle utopia in Louisiana where they can reign supreme but Damage spoils the party. Fans of fisticuffs will be happy. The majority of the book is a slugfest. Unfortunately the script is plagued by bland dialogue and poor characterization. I consider Vendetti a solid writer but every blow is followed with predictable word balloons full of bore.

Swamp Thing arrives towards the issues close and the Avatar of the Green has come looking for a favor. He wants Damage to demolish the jungle Ivy had created citing it’s full of life he can’t bring himself to destroy.

Swampy would rather Damage pound the jungle into oblivion rather than just using his own abilities to make it vanish with the blink of an eye. Sure, makes tons of sense. C’mon Vendetti. Seems like Swampy was just a plot device to inform readers Ivy was being manipulated by the Parliament. That’s fine and dandy considering she came off as unstable and highly erratic but this made the cover tease a complete bust.

Overall, the Unnatural Disaster arc has some pretty decent art but the conclusion isn’t anything special. Gorilla Grodd is unrecognizable and we are treated to a butt shot of Ivy that’s early 90’s Image cringe worthy. Swamp Thing is rendered as an extension of a tree, lacking in texture and leaving no depth to his look. This comic desperately needed a save from solid visuals, here it was further undone by uninspired illustration. 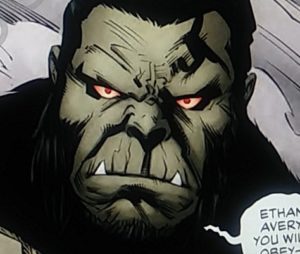 To those who believe the New Age of Heroes line needs to be put to rest, Damage #6 would make for a sturdy nail in the coffin.

On the plus side, I have waited a lifetime to see the Hulk and Swamp Thing meet. Too bad it was cheap imitations of both.