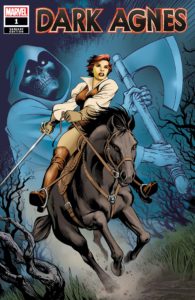 Agnes de la Fere, Dark Agnes, is a character that feels modern and relevant even though she was created in the 1930s and she inhabits the world of the 1500s. Agnes is the creation of pulp and comic writer Robert Howard. Agnes, along with Howard’s most popular character Conan, are now under the Marvel banner and Dark Agnes is Marvel’s attempt to explore other Howard creations after releasing multiple Conan titles.

Dark Agnes is a fast-moving, swashbuckling adventure that brings up storylines from Howard’s original works, but never requires the reader to have any previous knowledge. Writer Becky Cloonan weaves a story that introduces the character to new readers and honors the history of her adventures. Agnes quickly reunites with her sidekick Etienne Villiers and they allude to their former adventures in Howard’s stories. Cloonan’s confident and quick dialog constructs Agnes as a powerful character fighting against a corrupt societal structure. Agnes fought back against physical abuse and sexual assault and rose up as a hero and adventurer.

Cloonan has written and drawn for a number of dark and moody comics for Marvel, DC, and Dark Horse including Punisher, Batman, and Conan. She transfers that haunted character experience directly into Dark Agnes and Agnes’ scarred life. Cloonan crafts a fun classic adventure tale and leans into the shadowy darkness of Agnes. This creates a complicated character in a world that feels at home in the simplistic serials of the 1920s and ’30s. Luca Pizzari’s art heightens that matinee serial feels through swordplay, horseback chases, and tavern confrontations. Jay David Ramos’ use of color plays into the high adventure, while still allowing the dark shadows of Agnes’ past creep in. The combination creates a balanced, engaging adventure.

A good writer can still tell engaging, relevant stories almost a century after a character’s creation. Becky Cloonan does just that with Dark Agnes #1. Cloonan, Pizzari, and Ramos successfully maintain a French period piece while constructing an adventure for modern readers. The classic setting is unique within Marvel’s publishing catalog and hearkens back to a time when adventure comic books shared newsstand space with the new upstart genre of superheroes.