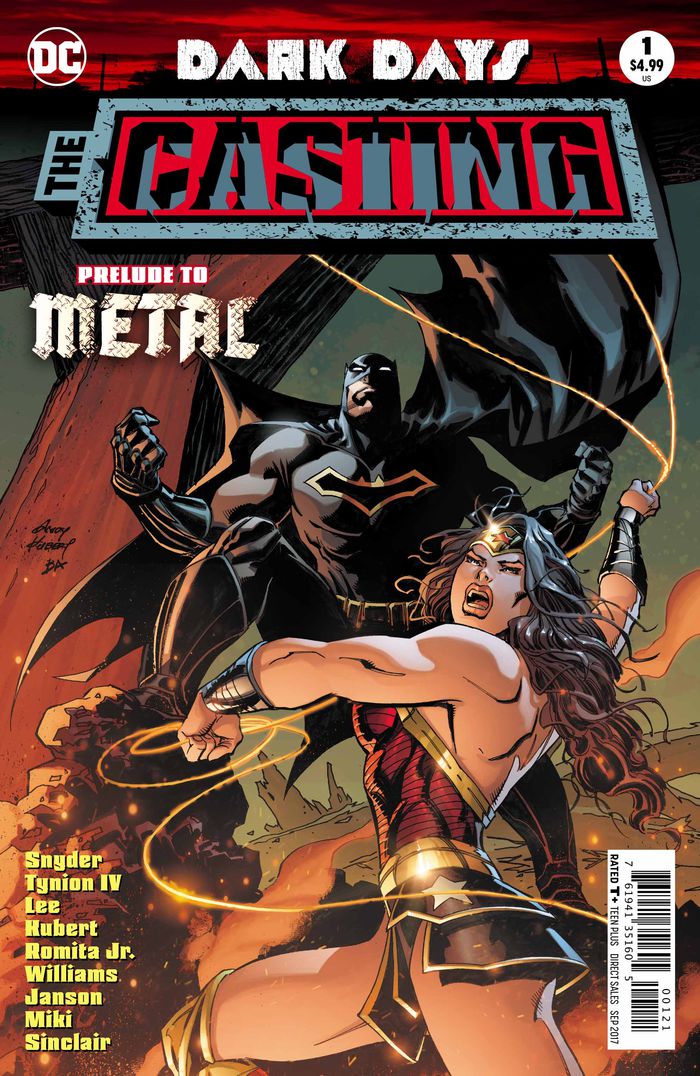 In a quiet museum Hawkman and Hawkgirl wander the exhibits as Carter continues to tell his story about the discovery that is consuming his thoughts. As the pair make their way to one exhibit in particular, the scene shifts to a time in the past when a group of immortal beings gathered to formulate a plan to keep at bay an ancient threat bent on dragging the world into darkness. What I enjoyed about this page the most is the revelation of three of the beings and their ties to the DC universe, specifically Batman and Shazam.

Meanwhile, Batman is getting closer to the answers that he seeks and he gets help from Wonder Woman to try and uncover the mystery of the metal. After finding out that the Gods have abandoned Earth and barred the gates of Olympus behind them, Diana gives Bruce a flaming sword forged by Hephaestus to aid him. In the Batcave, Hal and Duke confront Joker in the cell he’s being kept in deep under the cave. After goading Duke into releasing him, Joker takes on both Hal Jordan and Duke in close quarters and in the dark. The panels on these pages by Jim Lee are hauntingly good. The details are beautiful and the menace evoked by the darkness is intense.

Joker’s role in this story is so wrought with tension that you can forgive the fact that he’s a little exposition heavy. It’s understandable given the weight of the story and the details that need to be delivered. The scenes that focus on Carter Hall’s journal are amazing. I love the fact that there are so many callbacks to the history of the DCU. The connections between Nth Metal and the history of not only Hawkman, but the DCU itself are so well woven into the narrative that all of it is believable and adds new dimensions to the universe that these heroes inhabit. The Blackhawks and the Challengers of the Unknown make appearances that look to set in motion major events going forward and I can’t wait to see them. 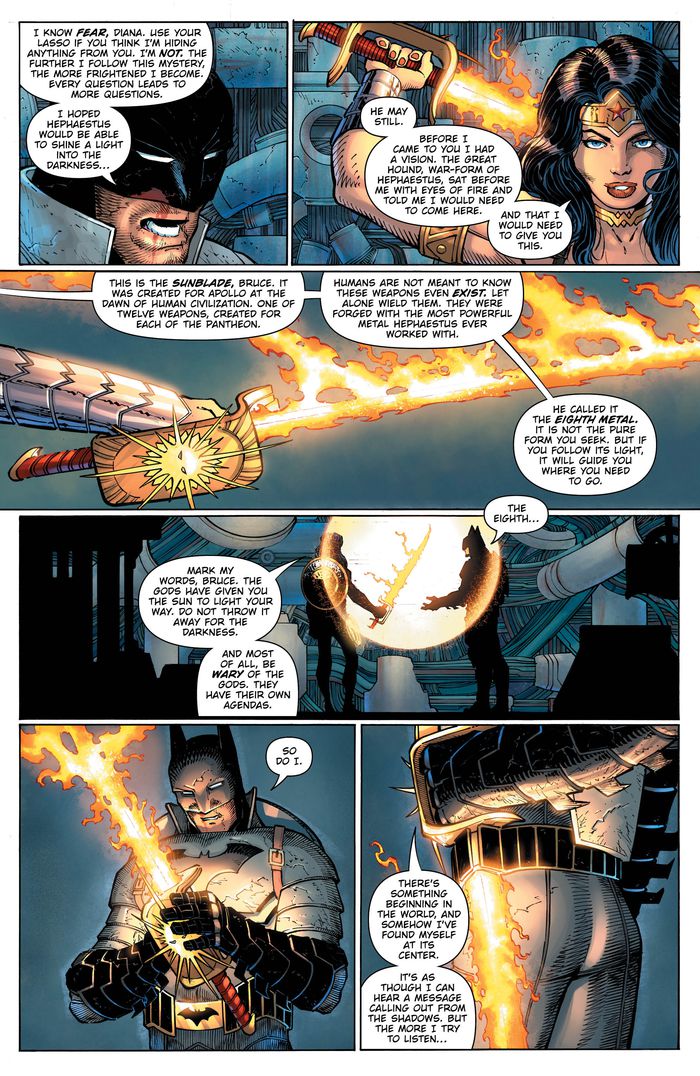 As Batman makes his way deep into the bowels of an abandoned base, he is confronted by Dubbilex. A signal that Cadmus might have a hand in the events as well. Another person from Batman’s past enters the scene with information vital to the mystery of the metal, but her motives are unknown and the price she offers Batman might be too high to pay. Back at the Batcave, Joker has turned his attention from the blinded heroes to a mysterious machine that readers of Snyder’s run on Batman will recognize. The final pages of this issue are revelatory and telling you anything about them would spoil the story going forward and you’re going to want to read that story. All I will tell you is that what’s coming is closely related to Bruce, Gotham and the legend of the Batman itself.

The mystery begun in The Forge continues to take shape in some really interesting ways in this issue. I continue to be drawn into the mystery the same as Bruce and I want to get the answers that he is seeking. I even feel the trepidation that everyone around him feels about what will happen when the mystery is revealed. This is great book by Snyder and Tynion IV. The story moves with both grace and tension. Nothing seems wasted in the narrative and every moment made me go back and read again to see if there were clues that I may have missed. The artwork speaks for itself. Three of the best artists in the business have crafted pages that not only showcase their unique visual style and talent, but flow together so seamlessly that you can’t help but admire each panel.