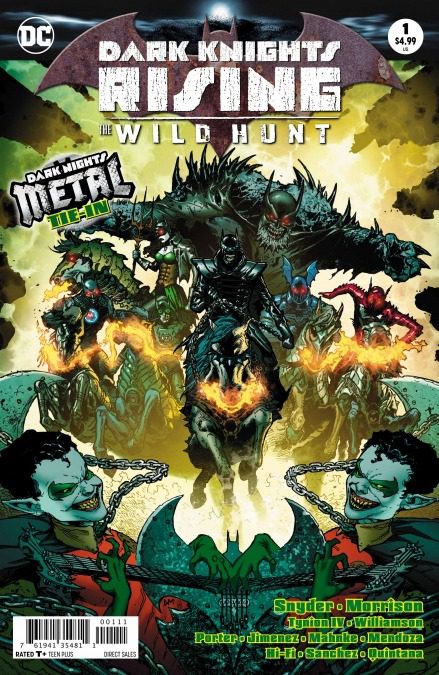 Detective Chimp is trying to uncover a new mystery and laments on the fact that not only is the person with him making him hurry, but he is struggling to remember details. He thinks back to a time in his past when he was a circus performer playing a simple tune on an accordion without knowing what the chords mean, but we do. We know that there is some significance to what Detective Chimp is playing even if he doesn’t. As we continue to watch the origin of one of the smartest minds in the DC Comics, Detective Chimp has a run in with another hero; Swamp Thing. He finds another friend in the forest. One that takes him to a fabled area that has been sought for centuries.

The waters ultimately lead the simian to a well-spring of knowledge that not only changes his perspective of the world but also helps him find the clues necessary to avenge the death of a friend. In the present, the Dark Knights continue their reign and Barbatos continues his plan to sink the Earth into the dark Multiverse. Detective Chimp and his friends are trying to find a way to use Red Tornado and the Metal Men to counteract the effects of Barbatos’ song. As Chimp works on contacting the League, Dr. T.O. Morrow has gathered some additional minds to deal with another problem. The laws of physics are changing and Morrow and his team, including Dr. Sivana, are hoping their location will give them enough time to come up with a solution. 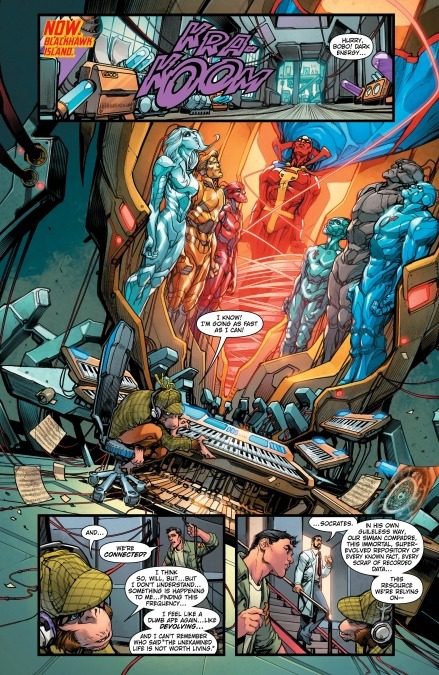 Have you seen this:
Nubia and the Amazons #1 (Review)

Flash, Cyborg, and Raven are deep in a bleed in the Multiverse, unable to determine where or when they are in space/time when Cyborg gets an idea. Raven is trying to communicate with the ship they are traveling on when Raven senses another presence breaking through; The Wild Hunt. Led by The Batman who Laughs, the Dark Knights are in pursuit of the ship and firing on it. As he goads on the Murder Machine, Dawnbreaker, and The Drowned share a moment of humanity as they listen to the sounds of the Multiverse. A moment that brings the Red Death in as they discuss whether what they are doing is heroic or not. This is an interesting moment that brings back into perspective the fact that all of these characters were the heroes of their worlds before the choices they made turned them into what they are.

As they attack and board the ship, Flash tries to find a means of slowing them down as Dawnbreaker takes on Raven in one of my favorite scenes from the book. In the midst of this battle, the prevailing theme of the overall Metal story is still present; hope being snatched away at the last minute, but this one ends with an interesting new hope rising.

There is some great writing here from Snyder, Morrison, Tynion IV and Williamson. They really know these characters in a way that transcends the simple hero/villain trope and gives depth to them, especially Detective Chimp and The Drowned. All of the characters are given some great moments and that is rare in an issue with so many of them. The art works great and flows well from page to page. There is the sense of being taken on a journey with this book both physically and developmentally. I really enjoyed Wild Hunt and the twists and turns it takes. Worth reading as the precursor to the end of Metal.