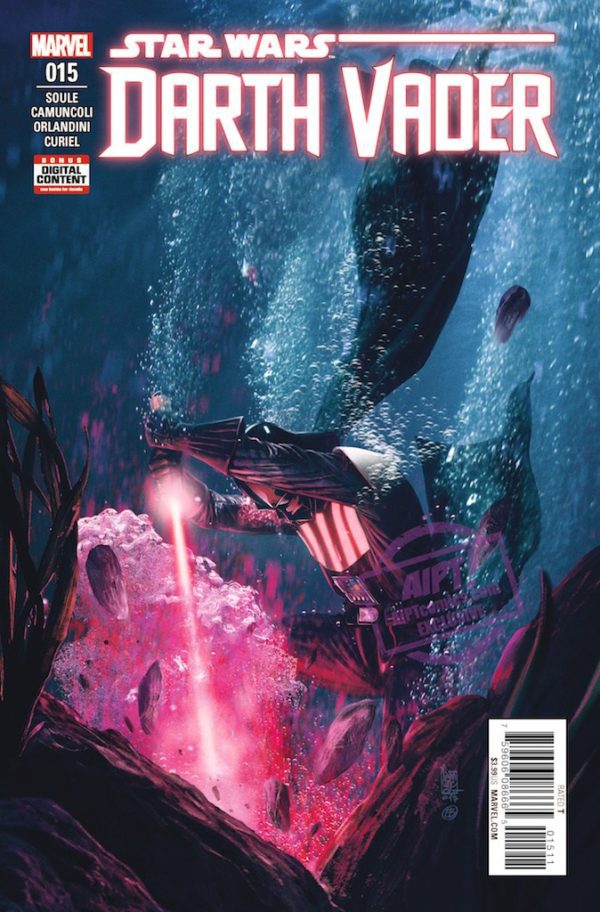 After a superb Darth Vader #14, filled with reflective character moments and lore building reveals, this issue is a roller coaster action ride. Charles Soule’s writing takes a back seat this issue and allows the beautiful work of the artistic team to shine. Guiseppe Camuncoli’s art captures a sense of scale, movement, and emotion fitting to this planetary conflict between Mon Cala and the Empire. The inks and colors by Daniele Landini and David Curiel take that grand conflict and make it feel alive. The end result is one of the most exciting Star Wars comics in recent memory.

The last issue revealed that a band of surviving Jedi on Mon Cala discovered that Anakin Skywalker had betrayed the Jedi and became Darth Vader. Vader and his Inquisitors know there is a Jedi counseling the Mon Calamarian King Lee-Char and tortured him to get information about the Jedi. Issue #14 ended with a cliffhanger of an attack as the sea life created a series of giant tidal waves eliminating the above water structures and wiping out some of the Empire’s forces. Issue #15 opens with the aftermath of this attack and finds Vader submerged in the oceans of the planet. The artwork on the underwater scenes begins with the sense of desperation and ends with Vader in complete control.

Soule demonstrates his knowledge of lore through Vader’s ability to control a giant squid. This is similar to Ezra’s ability to control and influence animals in Star Wars: Rebels, the difference though is the toll the dark side takes on the creature. Soule also provides an example of Ackbar’s tactics in a successful attack on the Empire. Again the artwork is the highlight portraying the suspenseful attack and destruction. The panel layout allows the reader to connect the character’s movement and tension in a way that conveys motion on the static page. As this story arc escalates, this creative team is one with the force and the page.

Darth Vader #15 presents an epic Star Wars story and is a showpiece of how those stories can create a sense of scale and action within an engaging narrative.