It’s the most wonderful time of the year and DC brings us another DC Holiday Special packed with eleven short stories. I look forward to these holiday specials as it gives the writers a chance to have something short, simple, but sweet with a nice holiday motif Almost like a break from all the crazy stuff we read our heroes go through every year. It immediately warmed my heart as we start off the book with one of the jerks of the DC universe, John Constantine being his good-ol self at a bar.

I’ll always enjoy his antics because even for as big of a jerk as he can be, you know he has a good heart. Clark Kent is also here and decides to sit and listen how there is hope in this world as the bar owner shares a few stories with John. I’m just going to highlight a few of these tales to give you an overall feel of the issue. Batman’s short “Twas the Night Before Christmas” happens and by the time it ends, it actually felt like something that could’ve used a few more pages or even been its own one shot. It wasn’t bad but it just feels like its rushing to the last page. Green Arrow and Black Canary have fun in a tag team to watch dubbed “You Better Think Twice.” and even though I felt like it was a fine general Christmas story. It really comes together in the end as is a great symbol for what the holidays are about, which is to bring a smile to on everyone’s face. 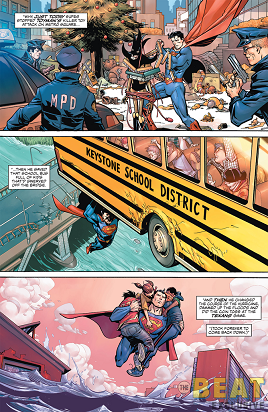 Sgt. Rock is back in “Going Down Easy,” but we get so little of him. However, the soldier’s story we do get is sad for all the right reasons and just makes me want more of this type of tale for Tom King in the future. Starfire gets her own small bit of a story in Shea Fontana’s “Holiday Spirit” as she goes through a small journey and eventually celebrates her first Christmas with the Teen Titans. The best part of this short for me was seeing her take lead of the team when they face their villain.

Batman and Wonder Woman ‘s short “Solstice” is much better than the Batman story we got earlier as it represents what these two characters are about and the importance of having someone who cares about you close in your life. I would’ve preferred if the earlier Batman story swapped with a different character instead of having two stories with Batman in this special. The final panel in this special was a perfect way to end it and I would rather you all read it for yourself and hope you have the same smile from that last panel like I did when I read it.

The holiday special this year has some high points and definitely some low points. I do find that there is enough here to get some enjoyment out of it, especially if you want a break from world threatening stories.