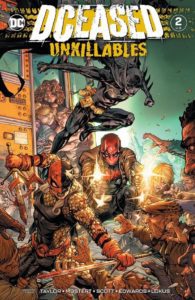 (Warning: Spoilers for DCeased: Unkillables #2 ahead.)

Tom Taylor has had such a strong start through the first two issues of DCeased: Unkillables. It’s to the point where I’m not at all fixated on the art.

Given this is a zombie apocalypse story, you might think the art would drive the bus with this story. Not the case. That’s got a lot to do with the characters Taylor is writing about, and his feel for them, as well.

In these early stages, Taylor has allowed this band of misfits to develop in their bizarre environment. They’re about to face even more adversity after the mess they’ve dealt with in DCeased: Unkillables #2.

That’s one of the great things about Taylor — because he does this with Suicide Squad, too: he’s not afraid to kill off any character. And in a situation like this, no one should be safe, even though Taylor has quite a few heavy-hitters in this story.

Now, as much as I’m not focused heavily on the art —which is strange, I’ll admit — part of that has to do with the fact I’m not a huge fan of Karl Mostert’s style. Specifically, everyone’s faces. The rest is good.

Still, I’m unaffected by it all because of the different dynamics of Taylor’s story. Deathstroke’s development as the leader of the group is interesting, given some of the company he now has. And the fact he’s encouraging Red Hood and Rose to have some fun is surprising, too. You’d think he’d want everyone to be in complete survival mode.

Also, we got a cool, but sad, cameo in the latter half of DCeased: Unkillables #2. Can’t wait to see who else pops up in the upcoming issues.