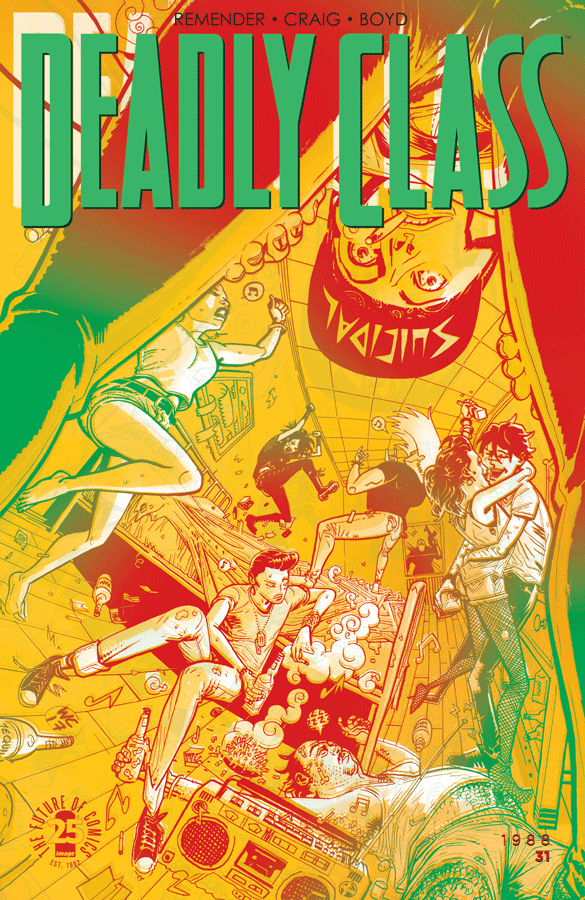 In the new issue of Deadly Class, we start our story not where you would think. Instead of seeing what unfolds with the crew in Mexico, we are greeted with the freshman class sitting in a pep rally at Kings Dominion School of the Deadly Arts. Quan, Zenzele, Helmut, and Tosahwi sit along with Petra who is the only sophomore in their group. We then see Brandy giving a speech in regards to trust and how people may appear among them. We are taught to never like this girl and she continues to drive us to dislike her as she begins to explain about letters she finds in Zenzele’s room that were never delivered to her parents and accuses her of murdering her own parents to the entire student body.

This sets off Zenzele in rage as she rushes to knock Brandy’s teeth out. After the confrontation begins with her and Victor, all Hell breaks loose in the auditorium as a massive fight begins with every student against each other. This is the kind of mess we regularly see our characters in and it’s always a pleasure to see the madness they go through. What makes it more exciting though is to see how they can escape it all. Learning why the freshman fled off to Mexico was done so quickly but enough to get us behind them to want to survive outside of the school and the rest of the student body. Now we are back in Marcus and Maria’s motel room with the group as Marcus is holding a gun to their heads asking questions. 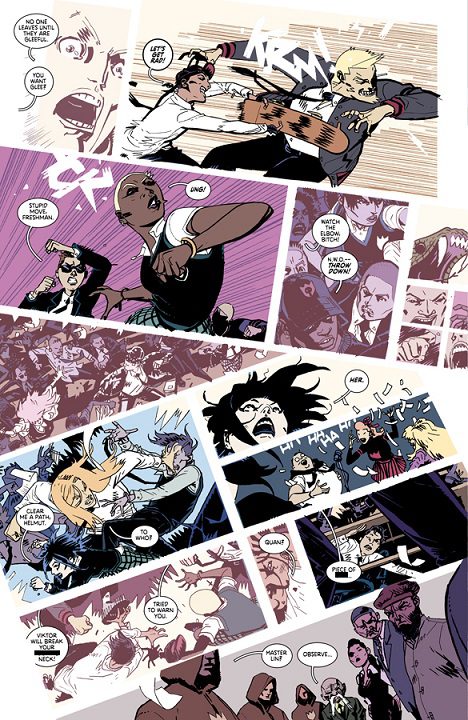 We are given a strong start of seeing Marcus interact upon meeting “new” people in his life now with students of a school he left. Showing his growth to be strong-willed is very much needed for someone like him to survive at this point, especially with him and Maria needing to be thought of as two dead people. After an exchange of words and full understanding of why the Freshman are in Mexico, they begin to go into a drug and sex party with ecstasy brought by Petra. The following pages bring so much life to the characters right now as there have been so many down moments for them, its great to see them let loose and just enjoy themselves without a care.

The way the panels are covering up the sex and how the colors go dark and blend around just paint a beautiful and dark image of lost souls just finding comfort in each other. We know Quan is a traitor of the group, but after a breakdown with Marcus. We see him speak with Victor and Brandy as he tells them about Marcus and Maria being alive. This sets Victor off in excitement to finally kill Marcus himself. But going back on the conversation with Marcus, it is probably the best exchange of words between any of the characters. Marcus shows Quan that he is someone just like him. Lost without finding anyone to understand him and explains that if you open up a little to the people around you, you can find the friends and family you always want. The buildup in what Quan may do, to his breakdown into tears is done fantastically so that you feel this character can turn around. After all of the excitement, we are left hung up on seeing Marcus confront Victor for what may be the last moment in either of their lives.

Deadly Class continues to build characters, bring gripping storytelling, and excitement in a direction that will always leave its readers wanting more.