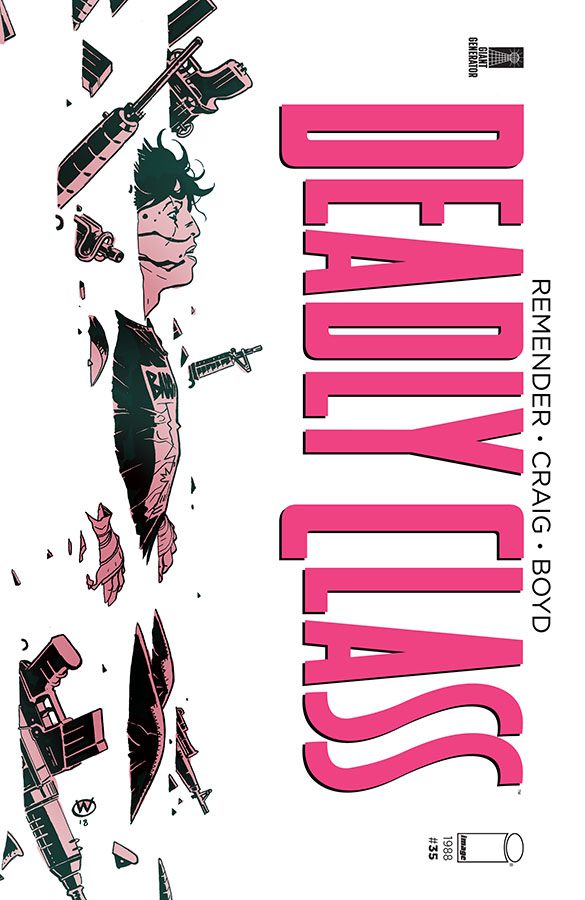 The new issue of Deadly Class brings us to a close on the current arc before it goes on break again. After all of the chaos which has not slowed down even in this issue. We learn a lot about where Marcus is now and the kind of person he is and pursues to be. The way Viktor and Marcus settle their fight is probably the most mature decision that the two have ever made. The issue gives us a callback on why Marcus even considered going to Kings Dominion School and how those reason’s really no longer matter to him. He’s grown so far from that point and has realized what he really wants in life and where he want’s to be and that’s just him with Maria at his side. The important part of this issue isn’t the intense violence and death that occurs. It’s about reflecting all that has happened and how it has lead everyone to where they are now and making the better decisions for themselves and not for that school or the ones that sent them there.

Wes and Joran on the art continue to do an incredible job making such mad looking panel’s flow so well. Many of the pages have some great intense moments and rushes and the layouts are done so well here. What we also get is probably one of my favorite pages from this series and it’s a great single splash page that I believe many will enjoy once they see it. Towards the end, we’re finally given a few pages of the group finally able to relax. It’s been such a long time since we had seen their faces look so rested as they figure out what their next move is going to be.

When the issue closes, you’re left thinking back on everything that all just went through. So much fighting, killing, and losses just happened and this is what Marcus brings up early on in the issue. It’s all about finding your peace and knowing when to fight. More importantly, it’s about knowing why you’re fighting. Not everything is closed out here but right now Marcus and Maria may be able to help these newer kids move forward with them until they inevitably run into the students of Kings Dominion again.