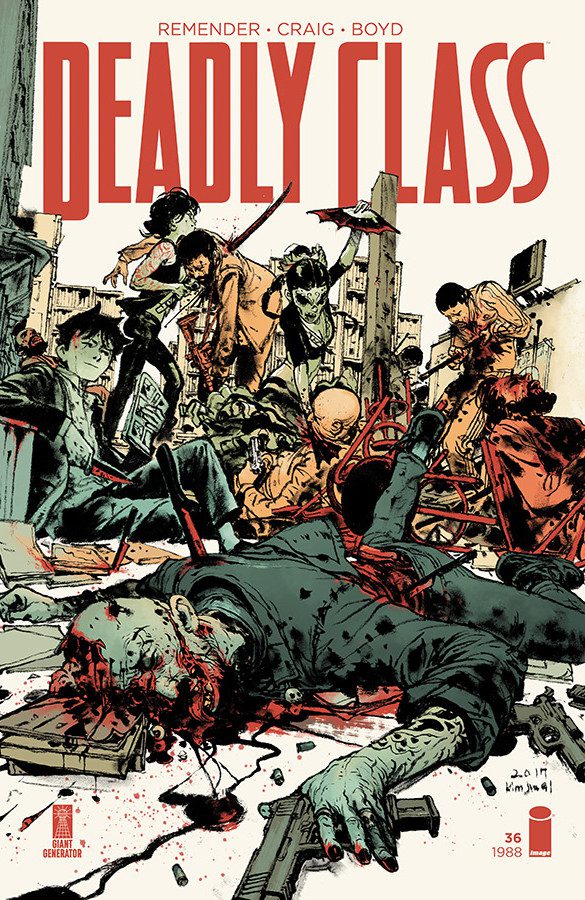 Deadly Class #36 takes you on a trip with Marcus now that he has finally had some time to breathe after escaping the madness in the last arc with Maria and everyone else.  This trip though is not an easy one for Marcus, as we see him deal with all of the demons, he has inside of him. It is by far the most bizarre issue of the series. We see Marcus struggle to really fight and face all that he has gone through. The issue is really about how he needs to come to terms of what all that has happened what he really wants in his life now.  Sure, he was able to escape for a while with Maria but now with what’s happened, he has finally come to a realization of what needs to be done. By the end of the issue he brings up to everyone what they will need to do so they can truly be free.

The issue by the end really sets up the arc for what will probably be the most intense and even bloody ride we’ve seen yet. This issue though is also one of the best in the run because it gives Marcus another big push in his growth as a person. He had reasons for going to Kings Dominion before but it was never clear if he would truly see through and commit to those goals.  He blames himself and society for a lot of his terrible luck and outcomes in life but now it seems that he has come to terms that sometimes that’s just how life is. This time it will be different because he is the one that will take charge of his life and those in it with him.

The art team here did such a great job creating the images that were going on inside of Marcus. It’s scary, messy, depressing, and even at times, we see bits of beauty and happiness. These are all the things that go on inside of someone but for Marcus, it really is mostly filled with darkness and it’s great to see him really fight through it. The way they display all the people that Marcus has become friends with is sad but done beautifully. The issue is really about self-discovery and now Marcus is more than ready to take the demons head-on.

Have you seen this:
The Falcon and the Winter Soldier Episode 5 "Truth" (Spoiler Review)