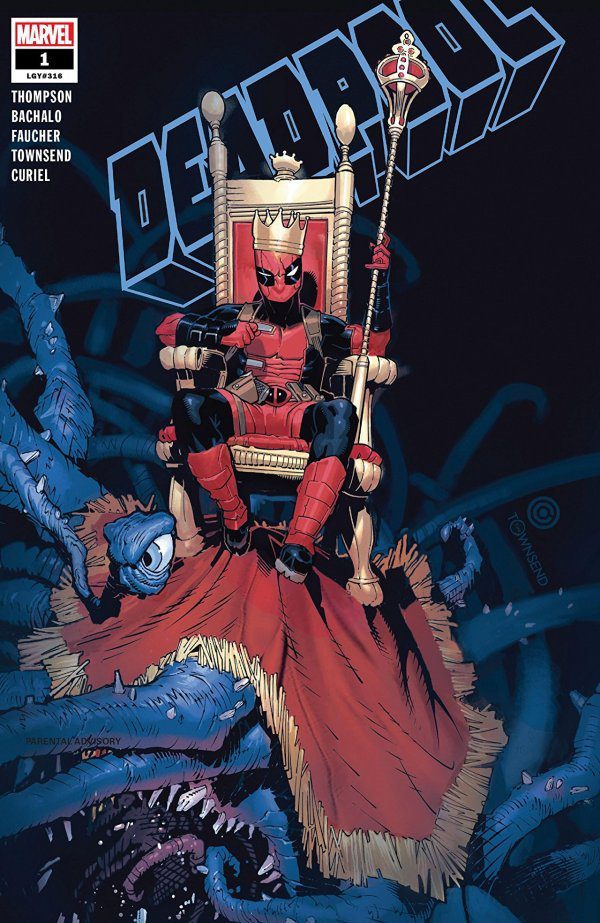 (The entire review of Deadpool #1 is SPOILER-FREE.)

Kelly Thompson is a great fit for Deadpool, and she displays that right away in Deadpool #1.

During her Mr. and Mrs. X run with Rogue and Gambit, Thompson was able to work with Deadpool a bit. He had his moments, but she wasn’t able to dig as deep with the character as she now can.

Now, the main reason Thompson is a good fit for Deadpool is she doesn’t get overly consumed with the plot in her writing. She develops her main characters more and makes them her own. That’s not to say she ignores the plot. Thompson just allows characters’ personalities to shine. Deadpool readers are here for action, no question, but his personality is what separates him from other comic book characters.

Of course, Wade Wilson’s personality is enjoyable for readers, but for the people he has to work with or fight in a given issue, he’s unbearable. And there are more than a few occasions in Deadpool #1 where he is as insufferable as he’s ever been. It wouldn’t shock me is Thompson set a record for longest speech bubble in a comic — if that’s a thing. Deadpool is random, off the wall and everything that makes him, well, him.

He’s in good hands with Thompson.

As for the plot, it’s out there. I don’t love it. Probably my biggest knock on the issue. But, again, that’s not normally what you read Deadpool for, so it’s not a big problem.

Chris Bachalo has the pencils with a slew of inkers. His interpretation of Deadpool isn’t my favorite. It’s not so much his style, in general. Because he does draw some other notable characters, and they look great. But Bachalo’s Deadpool is flimsy. There’s little muscle definition and he seems more like a teenager. That being said, I think Bachalo drew him well for the way Thompson handles the character. He’s full-clown mode. The humor doesn’t have the same impact if Deadpool is this jacked out of his mind.

All in all, a strong start.