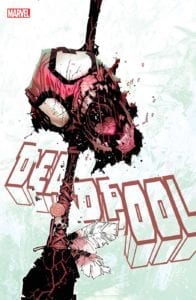 The more I actually read Deadpool (and not looking at his memes online) the more I fall in love with this character. He’s still on Staten Island, so… I still have that little bit of a bragging moment. Why yes, Deadpool is the King where I live.

This comic literally starts where the previous one leaves off (it even makes sure to mention it), and Deadpool is still fighting a brute (Kraven)  who won’t give up. His pals (?) come back to help him fend this brute off - even getting him digested to a point - but loses one of his minions in the fight. Here we actually see Wade calm down, and not full of sarcasm and witty narration. He is actually disappointed in himself, and sad that he lost someone. It was interesting to see a very human moment coming from the character who is all sass and tends to do anything but act human.

Thankfully we have a little short after this story, where Wade is back to being sassy and will do anything to cheer someone up. Guys, he’s seen your cosplays, and I think he approves. Gwen-pool is canon now. We can all go home.

The colors are not muted, but aren’t too bright… bright enough where we can feel happy while nothing happy is actually happening. I feel like that’s just Deadpool. Eternally positive and trying to making everything a joke, so that we can feel some sort of happiness even in the bleakest of times. With that said… I think we should be reading a bit more Deadpool right about now.