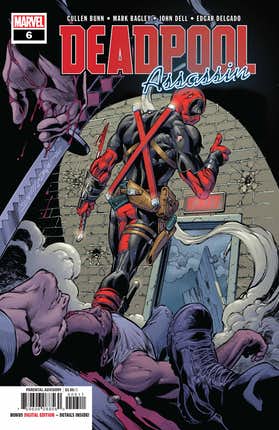 It kind of felt like a whole lot of nothing happened in Deadpool Assassin #6. Obviously, stuff happened but it didn’t mesh well together. There was the fight with Bloodscream, but that felt forced. And Threnody lost her mind, but then she just let Deadpool walk away?

That’s what probably made the least sense in all this, Threnody not sucking the life from Deadpool. She’s been working towards one goal – that’s literally life and death – Deadpool then ruins everything in an instant and she doesn’t try to kill him. Makes no sense whatsoever.

What saves Deadpool Assassin #6 is the dialogue and the art.

Dialogue is almost always the strongest part of anything Deadpool-related, but it really made the finale worthwhile. The best line has to be when Deadpool says to Threnody “You’re acting a little Dark Phoenix-y here.” That came in the middle of Threnody’s first attempt at to sucking the life out of Clarice’s baby. Simple, but perfectly Deadpool.

Mark Bagley’s art was very good. Thought he did well with Deadpool v. Bloodscream and was exceptional with Threnody in her “Dark Phoenix-y” moments. I’d have preferred he’d drawn more Deadpool v. Threnody, but that’s not Bagley’s choice.

Odd way to end the story. Not sure if that’s “prime” Deadpool, or not, but either way it didn’t sit all that well with me.