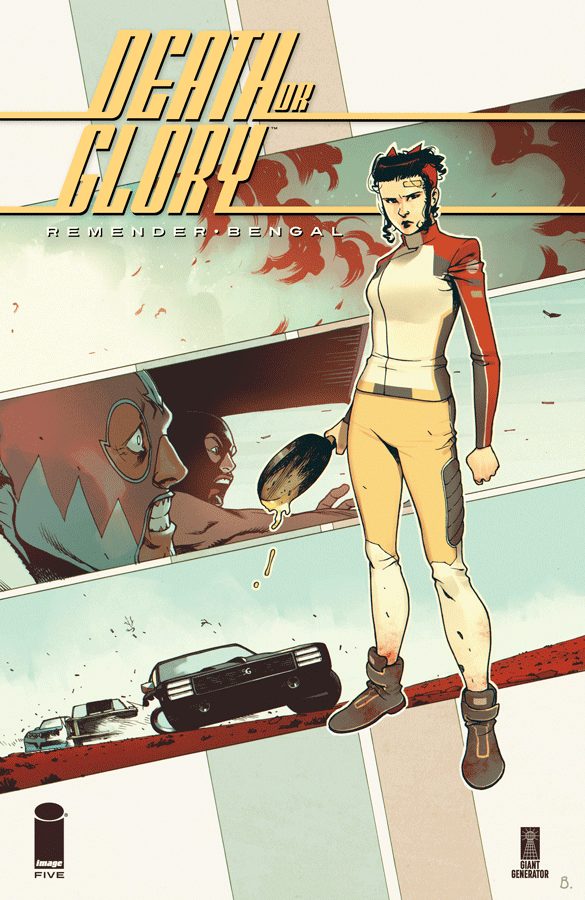 Death or Glory #5 picks up following Glory, Pablo and his young niece’s escape the butcher shop that fronts as facility killing and harvesting the organs of immigrants. Glory is putting gas in the car while she and Pablo are trying to overcome their shock and come to terms with the death and violence they have just witnessed. Pablo reminisces about his story and has difficulty accepting the circumstances of her death and more so how he will tell his niece.

This scene and this issue and this overall comic are really fascinating because they play into religious imagery. Previous issues we have seen women tending to harvested organs wearing nun-like habits similar to those Puritans wore. During the scene, while contemplating how to tell Isabelle, his niece, Pablo quotes Ecclesiastes 3:1-8. He also comments on Glory killing one of the butchers and when she  pushes him about his callus response on the devil he responds, “I believe that God doesn’t care for the devil.”

Pablo still has the liver he stole that he knows is from a universal donor since it is from a family member. His hope is that he can undo some of the wrong done through this atrocity by offering the organ to Glory’s father. Glory has a more cynical and realistic outlook on the situation. There is a dichotomy created between the characters. Despite both being morally good the major difference in their worldviews makes them very different. Both characters are also in immensely complicated situations where their prime goal is to care and save the ones they love.

In addition to the emotional drama of the story, the action in this book is top notch. All of the car chases feel real despite being in a 2D format. That can easily be created to Bengal’s art as well as Wooton’s lettering. A lot of story moments, especially those indicative of surprise are told through the use of shadows or lack thereof.

Overall, this comic has a lot of messages on the greyness of morality and utilizes very human topics such as immigration, health care, and religion to tackle it. Death or Glory is an incredibly impactful and emotional comic that in a lot of ways reminds me of a Telltale game. There are no right decisions because everything has a lasting and dangerous consequence but in the same vein, are a lot of wrong decisions. I have loved this book and this issue is no different. This series is another Remender gem that continues to leave me on the edge of my seat.