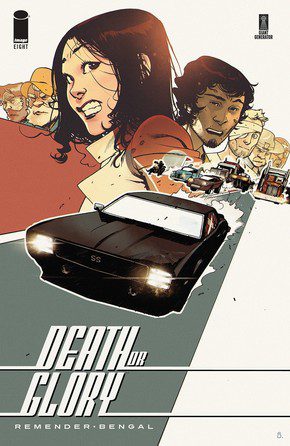 This is a comic that I have patiently been waiting for the rest of the comic world to catch onto. This is high quality, high action, and high adventure that leaves the reader stinking of gasoline and covered in dust.

The Summary: Glory’s cargo consists of a heavily drugged Pablo, a worried Isabelle, a very sick father, and a liver to save him—but it won’t last forever. She’s got a whole mess of trouble hot on her heels, and time is running out.

The Review: If there could be a spiritual successor to the car chase scenes of Mad Max: Fury Road, this issue would be it. I would gladly hand over my money to see this comic turned into a big summer blockbuster, as Remender and Bengal have created a panel by panel masterwork for anyone in the industry that might be interested in how to convey action, tension, and drama in a chase scene.

If you’ve been a fan of this series since the beginning or picked up the first graphic novel, then you already know that this series can go from zero to a hundred in a heartbeat. It does not lack for action. And given the high stakes that motivate these characters; their run to the border makes the suspense palpable.

If your a fan that is just joining the series…man you couldn’t pick a better place to get a full-bodied taste of what this comic is all about. Glory Owen isn’t just a driver that could outmaneuver every Hollywood wheel-man from Steve McQueen to Lightning McQueen; she is also on a mission to lead her band of misfits across the border to get her dying father the transplant he needs to live.

Glory and her friends are being pursued by a convoy of bloodthirsty organ smugglers. Who, with the help of a crane and a mobile operating room, is picking off and dissecting Glory’s friends at speeds of over one hundred miles an hour. The action sequences that are played out during this chase are insane, as chainsaws tear the roofs off of cars, people are plucked out of their vehicles, and a mad surgeon straps down and operates on unfortunate victims.

If you’re looking for something vastly different from the standard superhero fare, then this is the comic to buy. It will blow the doors off your brain. Bengal has not only kept the standard of art on this title high, but it’s also gotten even better in the latest issue. The flow and energy on every page are supercharged. My only complaint with this issue is that Remender has some trouble writing in a “good ‘ole boy” dialect and the ensuing dialog comes off stilted. That’s about my only complaint with this book right now.

This is a high recommend.