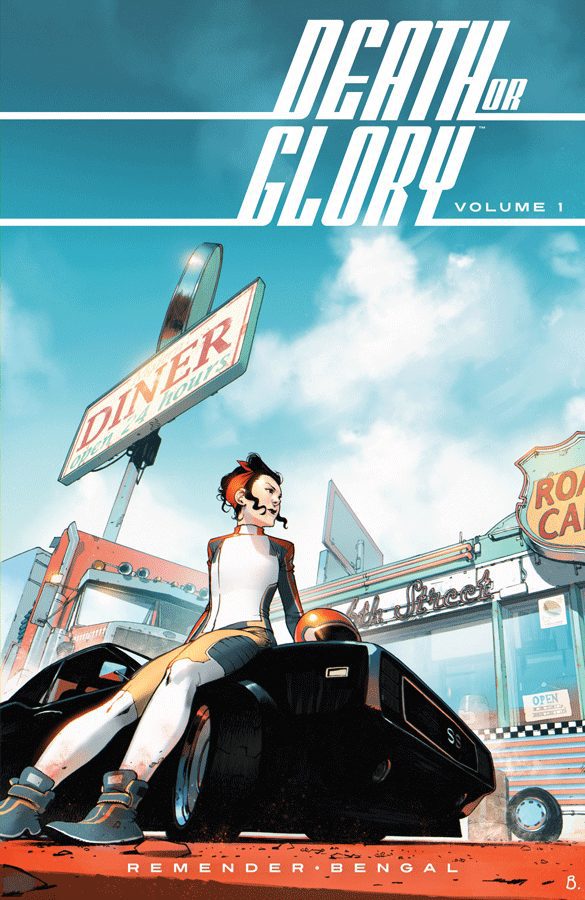 Death or Glory: Volume 1- “She’s Got You”
Image Comics

Death or Glory is the tale of one woman’s journey to save her father. Glory was raised by a single parent father on the highways and bi-ways of America, living a life off the grid, with only the support of a convoy of same-minded nomads roaming the open roads. Now Glory’s father needs a lifesaving kidney surgery. Just how far is she willing to go to save the only family she has left?

This series takes the high octane vehicular action of car-porn like Fast and the Furious and melds it with a story of redemption and revenge ala Kill Bill. By the time this trade comes to a close Glory has gone toe to toe with crooked cops, a Luchador themed Mexican cartel, serial killers and an ex-husband who is a raging asshole. Yet, somehow through all of this, Glory is still a character that displays a complex set of emotions. She’s a woman scorned, a betrayed wife, a tough-as-nails stunt driver, and also a daughter who is willing to risk it all for the ones she loves.

There are moments within this trade that are just downright brutal and bizarre. I could go into detail but I think that would diminish the impact of seeing these scenes for yourself. Just know this, there is a serial killer in this series that uses a liquid nitrogen gun to gruesome effect, and that’s not even touching on the Korean mob boss who is doing unspeakable things to illegal Mexican immigrants. For every scene of over-the-top violence, there is a matching car chase. Bengal pulls out all the stops when depicting these high-speed gunfights and crashes. You feel the action. You feel the intensity. That’s not easy to pull off on a static page.

The art in this graphic novel is exquisite. There’s no doubt that Bengal is flexing his considerable artistic muscles in this series. The cars are sleek, the main character is sexy, the action is turned up to eleven. There is not a weak page in the entire trade. The book is worth the cover price for the art alone.

That’s not to say that Rick Remender is slacking off on this series. The writer extraordinaire matches Bengal’s visuals with a story that is fast-paced, layered, and at times shocking. There is a scene that involves two cops and a pepper that I will let you discover on your own that is just twisted. For all the intense action that this book provides Remender balances the story with constant reminders of why Glory is doing what she is doing. She is driven by the love of her father. Every bullet, every crash, every blood-soaked minute is in an effort to save her only family she has left.

There is also the deeper narrative about the cost of freedom in the modern world. The lengths in which a person has to go to achieve real privacy and disconnect from the system now pushes people to the fringes of society. A truer tale could not be more relevant in today’s social media heavy, twenty-four-hour news cycle/gossip mill. The open road is the last great untamed frontier of America and Remender laments throughout the story of how we, as a culture, have forgotten what it’s like to get behind the wheel and leave the world behind.

This is a tale that carries itself closer to the crime capers of Lock, Stock, and Two Smoking Barrels than your traditional action story. The heroine is justified in her motives, the bad guys are REALLY bad, and when you enter this world you discover that there is always a deeper layer to everyone you meet.

This one is definitely a book you should check out if you’re into a mature action adventure. Just be warned, there will be parts that have you saying to yourself, “What the hell?!?”