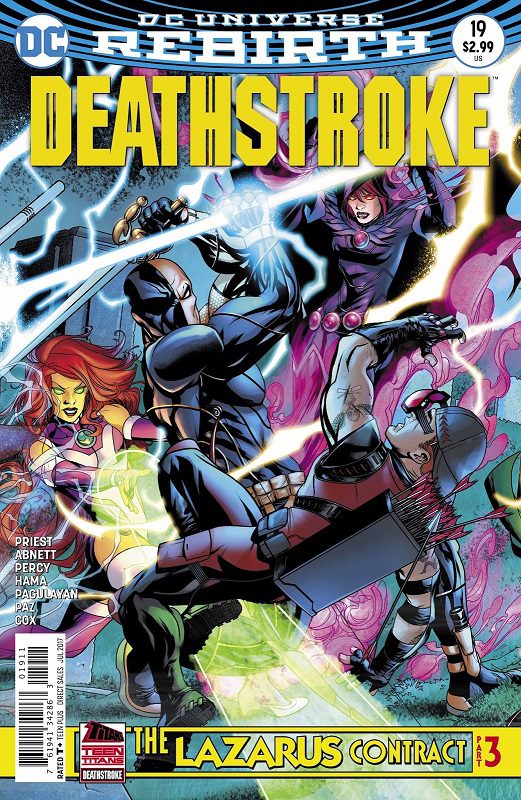 Deathstroke #19 is the third part in the Deathstroke, Titans, and Teen Titans crossover and it is the first issue that moves the story forward. If readers are not familiar with the previous two chapters – here’s the chance to catch up in three quick points. 1) Deathstroke remembered (due to events around DC’s Rebirth) that he had a son, Grant, and that his son died fighting the Titans (back when they were the Teen Titans). 2) Dick Grayson made a deal with Deathstroke that he believes to be broken. 3) Deathstroke abducted both Wally Wests and siphoned off some of the speed force. All of this can also be quickly learned from this issue of Deathstroke. For fans of any of these three titles, Deathstroke #19 finally makes the crossover engaging.

Writer Priest’s script goes a long way in making this storyline finally come alive. Whether it is a decision of the writing team of Priest, Dan Abnett, and Benjamin Percy to pick up the pace or just a matter finally having enough setup to engage readers of any of the properties, this issue provides strong character moments for Slade Wilson, his sons, Dick Grayson, Wally West, and Damian Wayne. Deathstroke writer Priest is freed from trying to balance a team of characters and is able to focus on the heart of the storyline. The elimination of filler panels provides a new found focus to this crossover and makes this chapter more successful than the previous two installments. The narrative is strong even as it jumps from character to character and between time period to time period. 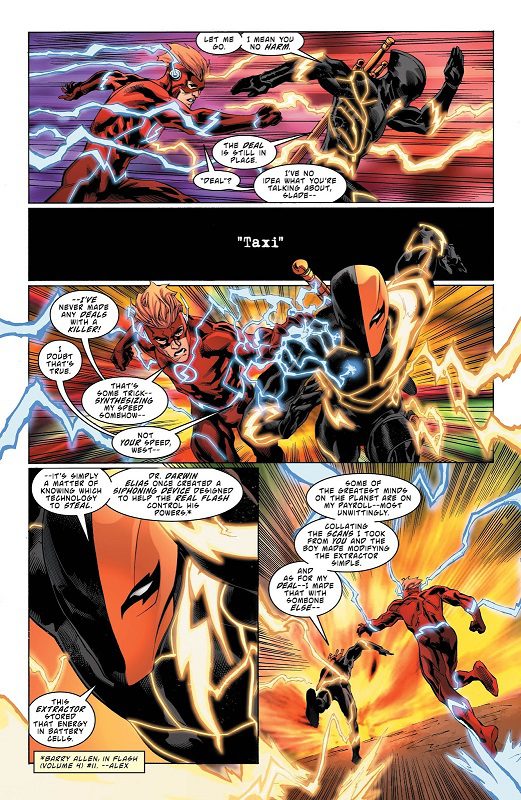 Unfortunately, the art is not as strong. Artists Carlo Pagulayan and Roberto J. Viacava share duties in this issue, but the styles of each artist are distinct enough that it creates a jarring experience for the reader throughout the issue. If the artwork was split between past and present, the shift in styles would be a logical storytelling device. Unfortunately, that is not the case.

In spite of the inconsistent art, the narrative is executed with such momentum that readers are not provided time to linger on any one panel. Backstory for the Titans and Slade Wilson’s family and intermixed with current character interactions all of which strengthen the individual characters and the plot of the crossover.

After a slow start to this crossover, Deathstroke #19 finally makes up time and creates an engaging event. Readers do not need to worry about catching up, in fact, they can skip right to this issue. Priest’s script rewards readers with a compelling crossover and a final panel that will have readers eager for the upcoming Teen Titans Annual to see what comes next.