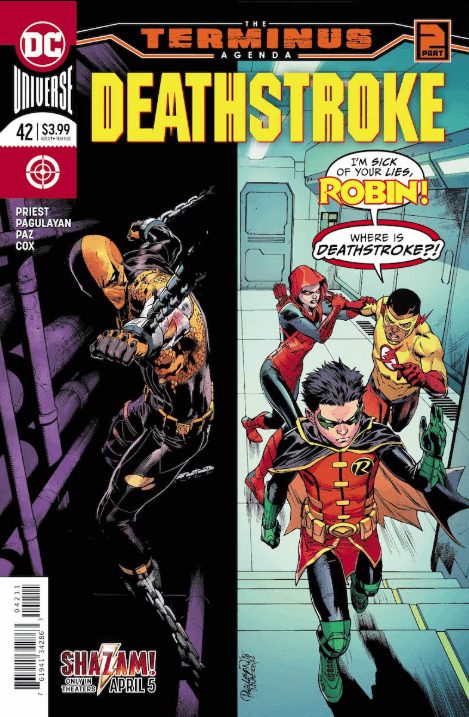 The second chapter in The Terminus Agenda crossover between Deathstroke and the Teen Titans, Deathstroke #42 moved things in a wild direction.

Jericho was the one that turned his old man into Robin and company. Deathstroke broke his own arm to escape Robin’s captivity. Well . . . that last bit isn’t that crazy, but Deathstroke did put on a Batman t-shirt before Robin returned. (How do they have anything big enough to fit him?) Furthermore, Deathstroke is back in Wally West’s ear and also continues to reap the benefits of investing in real estate in Robin’s head. And he’s looking to expand.

Deathstroke concludes Deathstroke #42 by informing Robin how he plans to fix the now broken bird.

Now, Slade may be suicidal. With all the insanity he’s experienced lately, that wouldn’t be too farfetched. But it’s still too hard to imagine Slade Wilson wants to end his own life.

Helping Robin isn’t hard to believe though. He likes Damian Wayne. The kid is deeply impacted by every interaction he has with Deathstroke, and Slade likes that. The fact he’s Batman’s son has to play a role in that.

But it seems Slade likes the kid because he sees his potential. Potential to be a deadly force that strikes the fear into everyone. Robin could create headaches for his mother’s side of the family, while sending Batman in a fit of rage; all of it would be music to Deathstroke’s ears.

But the idea of Slade sacrificing himself for this, or anyone, is hard to imagine. There has to be another play here.

More importantly, can he turn Robin into a greater killer than his grandfather ever expected him to be?

Then there’s the matter of Wally West. If his play is to turn Robin into a killer, what’s his play with Kid Flash?

Or maybe . . . maybe his play in it all is to set them both on a righteous track, or something. Maybe Deathstroke wants Robin to have his chance at killing Deathstroke, only for him to turn the opportunity down. It could help with his rage.

Last thing that shouldn’t be lost in this: Black Mask is still an idiot. Did anyone else think for one second Deathstroke would help the other prisoners escape? Suicidal or not, that was never happening.