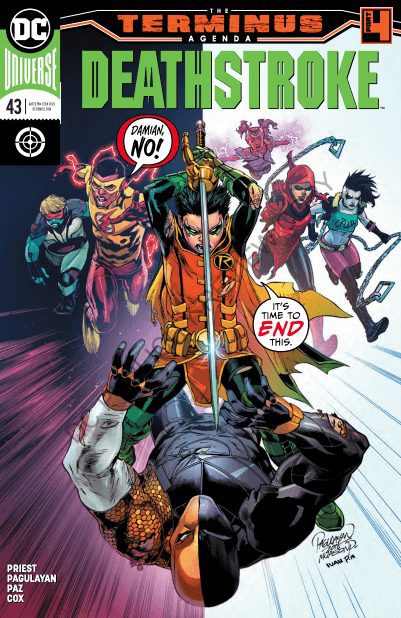 Where do you being after an ending like that?

Deathstroke #43 was the fourth installment and conclusion of the Terminus Agenda crossover event between Deathstroke and the Teen Titans. In the issue, we get a better look at why Damian Wayne cannot stand Slade Wilson. It definitely makes sense, but the idea Robin hates Deathstroke because of his mother (Talia al Ghul) and not his father (Batman) is odd. Is that because Deathstroke has shown him the slightest bit of affection and the one person in his life who was supposed to display that to Damian never did? That seems to be what Christopher Priest is trying to say.

In the course Robin figuring out his mommy issues, Deathstroke unleashed Robin’s Terminus Protocol. Now the loose inmates will die if they escape the Teen Titans facility. Robin had a pretty questionable past, but this is some next level security. It was dormant prior to Deathstroke’s tinkering, but it goes to show just how extreme this Boy Wonder can be.

Clayton Crain’s variant cover for Deathstroke #43 may be the greatest Deathstroke cover ever. He’s mid-gunshot, looking absolutely shredded in his Ikon suit while running away from what appears to be devastation. And Crain used just the right amount of light from an explosion and the gunshot to allow Deathstroke to jump off the page in what looks like a nighttime scene.

(Major spoiler ahead if you haven’t finished reading the Deathstroke #43.)

But all of this was nothing compared to Deathstroke #43’s ending.

Slade told Red Arrow (Emiko Queen) in Teen Titans #29 “we all become our parents eventually.” He was pretty spot-on because Emiko’s mom, Shado definitely would’ve shot Deathstroke in the eye.

There’s no way he’s dead though. No shot! Christopher Priest hasn’t woven this amazing story for Slade Wilson to die in such an anti-climactic fashion.

On the other hand: he got shot in the eye with an arrow by a world-class marksman. Even for Deathstroke, that has to be hard to bounce back from. Plus, Priest teased Deathstroke #44 as “Funeral for a Friend.” That can’t be good.