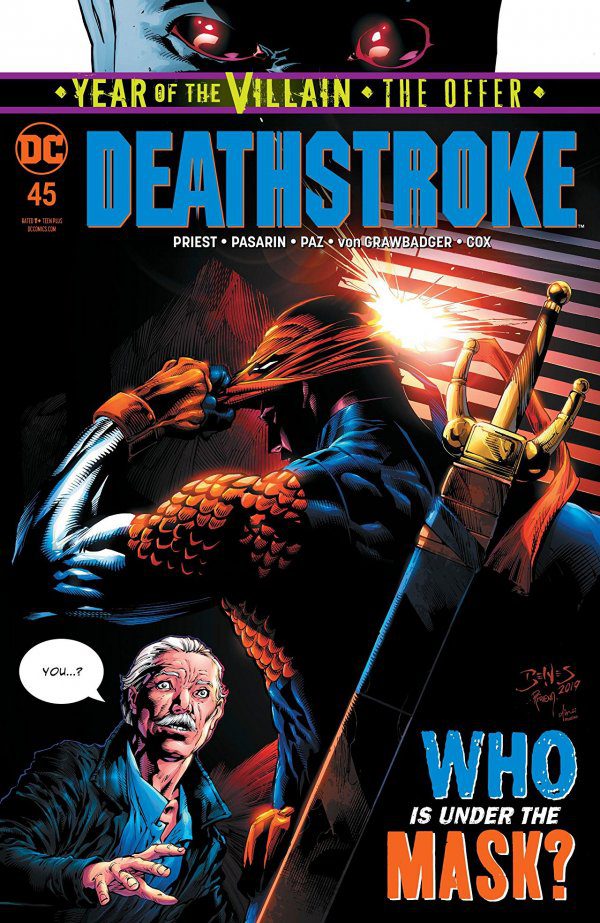 (If you have not read Deathstroke #44, the issue prior to this one, and plan to, you really shouldn’t read anything past this sentence.)

At first, the idea of a Deathstroke title without Slade Wilson involved in the actual story didn’t seem appealing. But, as every loyal Deathstroke reader now knows, it’s best to not question Christopher Priest when it comes to the manner in which he handles Slade.

Deathstroke may be gone, but he’s still making an impact on the world. In some ways, it’s to be expected. Slade was one of — if not the — greatest assassins on the planet. Once he’s gone, there’s going to be a little chaos.

Though just how much, and in what manner, might be a little different than you would’ve anticipated.

(Major spoilers for Deathstroke #45 below. Stop here if you have yet to read the issue.)

I’m in on Rose Wilson as Deathstroke.

Bringing in Shado was an excellent move to steer the story.

Terrence is right, Jericho needs to stop blaming Rose for his actions.

(Needed to get that all out first.)

Rose has a long way to go before she’s on her dad’s level. Though, until the mention of Emiko, it seemed like she wouldn’t really follow in Slade’s footsteps — given she didn’t use lethal force on her target’s men.

But now, thanks to Shado, it looks like Rose is going to go bananas on the Teen Titans, Red Arrow in particular. I wonder how Jericho will factor into it all, given the proposition a certain evil mastermind threw his way. Based on Jericho’s current mental state, it seems likely he takes advantage of the offer. For what purpose though — good or evil — is hard to tell at this juncture.