I love VR.  From the moment I heard about the Oculus Kickstarter, I knew I had to be a part of it.  To convince my wife that VR was a sound investment, I ditched my iPhone and switched to a Samsung Galaxy, all well before the Oculus Rift was a commercial product. I did this simply so I could show her WHY I needed to build an expensive PC and spend way too much on a VR headset.  It worked. One of the first demos provided for the Gear VR had a scene where you were floating over the earth in space. As a 36 year old nerd who dreamed of going to space camp and, eventually, moving among the stars, this ONE SCENE was almost a religious experience for me.  I was in awe, misty eyed, and in love. I couldn’t wait for the Rift to be released so that I could do this with all of the fidelity my new PC could offer. Unfortunately, the only tears in my eyes during my time in Detached came after finishing 45 minutes of floating my way through an empty space station, when I was curled up on my bed in the fetal position trying desperately to fight off nausea and dizziness.

Here’s where it gets difficult to provide some impressions or reviews of experiences that you can only have in Virtual Reality.  In the 6-9 months I have owned and been a part of the community around the Oculus Rift, I have come to realize that everyone has a different level of tolerance. More than just a level of tolerance, everyone is affected differently by different experiences, seemingly without rhyme or reason. For instance, I know of individuals who can fly around all day in Elite Dangerous, doing space acrobatics and pulling perfect immelmann’s, but the second they strap into Project Cars, they get immediately ill, while others can’t stand the thought of ED, but have a perfectly great time racing for hours in Project Cars. I’ve lost whole days to Elite Dangerous and Project Cars in VR, but Detached was a whole different animal. That’s not to say that Anshar Studios doesn’t have a good game on it’s hands.

Detached is described by Anshar Studios as a “suspenseful interstellar duel that demands tactics and skill to survive.” The experience of playing this game is actually somewhere between Alien Isolation, Descent, and the movie Gravity. When you start the single player portion of the game, you’re immediately popped into a large cargo bay like area with floating glowy donuts you’re challenged to maneuver through while prompts teach you the controls. Once you have snaked your way through the glowing space donuts, you activate the door panel and off you go into the space station.  What you won’t find much of is any sort of explanation of what your goal is. The computer that speaks to you during the training session is relatively quiet during the actual game. She isn’t providing you with objectives, instead, the game relies on exploration and discovery.

As you wander the gorgeously detailed space stations and asteroid fields, you’ll need to find fuel and oxygen to keep yourself alive. You will also find NAND’s (which are basically space batteries), and various tasks to complete. One of the first tasks I attempted was to fix a reactor chamber in order to power, presumably, a communications relay. Completion of this task involved opening various portals and moving and transporting materials, then activating the corresponding panels. It’s all very standard stuff for this type of game, but what sets this one apart are the visuals and sound design. The music and sounds, and lack there of, are perfect accompaniment to your adventure in the game. The music is melodic and soothing, and the sounds of the thrusters on your suit are always satisfying.  I believe where this game fails is the controls.

For me (and as I stated EVERYONE has a different VR experience) the controls are central to my nausea problem in this game. They’re clunky, they’re hard to get used to, and they never feel intuitive. Rarely during my time in this game did I feel like I was moving the direction I had intended to move. The space nerd in me can appreciate the accurately rendered physics of the movement, but also wonders why the boots of my suit can’t attach me to surfaces OBVIOUSLY designed to be walked on. I feel that, if I could attach myself to a surface and only float around when I needed to, this game would be much more comfortable. Of course, even without such a mechanic, I could become more comfortable in the game if it allowed me to customize my control settings. The way pitch, yaw, rotation, elevation and roll are handled all feels very clunky and never feels natural. You move one stick or pull one trigger slightly the wrong way, and the only place you’re going is straight to vomit town (the dirty inner-city of flavor town). Another possible control method that may help the nausea, is one where movement direction is at least partially controlled by the headset movement…If I could target a door or a wall by looking at it, and have the suit and thrusters assist me in auto-vectoring to it, I wouldn’t have to experience the issue where I wasn’t moving in the direction I intended. 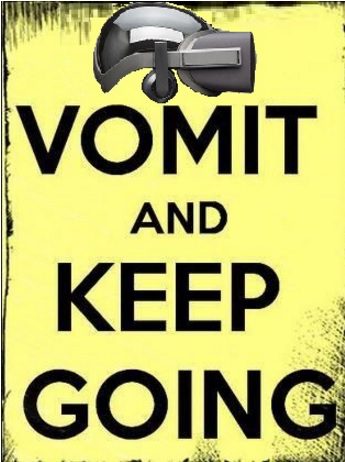 Despite my issues with the controls, and the severe nausea and dizziness, I like this game. It’s atmospheric, moody, and absolutely gorgeous to look at. While the puzzles seem to be pretty standard fare for this type of game, the setting in VR helps them feel compelling. Unfortunately, I didn’t make it far enough to experience any of the cat and mouse PvE that is present in the game, but I hope to go back to it one-day. The game, while still in early access, feels very complete and is at an extremely reasonable price point, coming in at $19.99 on Steam and the Oculus Store. As an early access title I’m hesitant to give it a score, however if, like me, you’ve always dreamed of floating in space (and feel your stomach can handle it), I would recommend picking up Detached.

Have you seen this:
Legends Gamer Pro Now Available