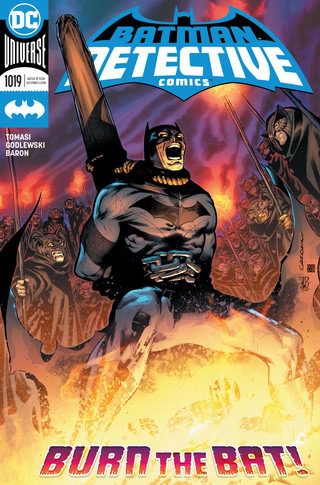 The annual tree lighting at Wayne Enterprises gets an unexpected party crasher and Batman confronts an otherworldly entity.

With the tree lighting under attack and Bruce Wayne in the line of fire, Bruce will have to think fast if he’s going to stop the raging Viking coming after him without revealing that he’s Batman. Taking the mad Viking out and putting him in police custody is only part of the evening’s events when the Dark Knight begins a log of this investigation and the ritual style to the murders themselves.

When the Viking escapes from custody, Batman tracks him to a new location and discovers not only that the perpetrator was not acting alone, but that the cult he works with has summoned forth an even bigger threat.

Well-paced and filled with tension, Peter J Tomasi brings this arc to a satisfying conclusion. The writing is well done and having the story from the point of view it is was a great touch. One that made the story more interesting and engaging. The dialogue is tight and the interactions between Bruce and Lucius are one of the highlights, but this story is more about how Bruce will function in a post-Alfred world and that is handled well by Tomasi.

Scott Godlewski has some bloody and beautiful art in this issue. The visual violence goes a long way towards matching the tension Tomasi is trying to land in the plot. There are great visuals throughout and Godlewski is equally skilled at showing Batman fighting a monster as well as Bruce in contemplation in his empty library.