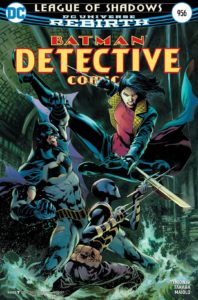 This is the final chapter of the “League of Shadows” storyline and Cassandra Cain faces off against her mother, Lady Shiva. It wasn’t the epic finish I was hoping for, but it was still an intense ride overall.

Overall, I could not be more happy with what James Tynion did with Cassandra Cain this art. The whole ballet angle, and her figuring out who she wants to be was amazing. It took her mother and the threat of the League of Shadows to get where she needs to be. The New 52 did a ton of damage to Cass and Stephanie Brown as characters, both were completely erased from the universe and they were in desperate need of a reboot. Thankfully Tynion has taken it upon himself to rebuild their characters and bring back to prominence. Steph will be getting her own storyline soon, if not next.

The League of Shadows was getting scarier and scarier by the issue, but in the end, Lady Shiva outshined them all, which is kind of a bummer. Cass decimated every single member of the Shadows, which makes them now look kind of weak. The whole point of the previous issues was to show how big a threat the League of Shadows was and in the end, it only took one person to bring them down. Before this issue, they were a great addition to the Batman lore, much like the Court of Owls. But the league was dispatched of so quickly it feels a little anti-climactic. Lady Shiva, on the other hand, was a beast. I can’t wait to see more of her, especially now with the added layer of complexity to her character. Her defeat and capture by Ra’s really changes the dynamic for future appearances, because she may need her daughters help soon. The whole relationship between Lady Shiva and Cass was so well written, the dialogue exchanged between the two during the fight was a great read. 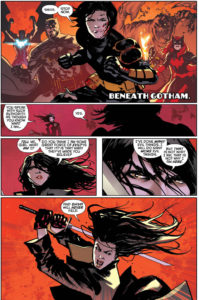 Batman and Batwoman really took a backseat to Cass in this issue. It was the right thing to do, but a little surprising considering how important Kate and the Colony were to the story at the beginning. I just want to add that the inclusion of Clayface to the Bat-team was an excellent move, and it will hurt so much when he eventually loses his mind and turns on the team.

Marcio Takara’s art took a while for me to get used to, but now it has really grown on me. It’s very stylized compared to the other artists on this series, and it looks great. There’s a creepy element added to every character that fits the world of Batman perfectly. The issue looked great, and I’m very happy with it.