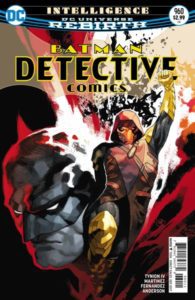 Batman goes to Zatanna in search of knowledge, which she has no interest in supplying. Also, Azrael struggles with controlling his programming.

The last issue of Detective Comics had me really excited for an Azrael storyline, but so far it has been a sluggish and convoluted start. Bruce seeks help from Zatanna, but it’s never clear what he’s asking for. She does her best to warn Bruce about immersing himself in magic, but of course, he was unfazed. Eventually, she shows him the God Machine, which might be what he wanted. Sure it’s mysterious but their discussion is so vague that it doesn’t feel like much occurred. Which is a shame because it was the most interesting part of the comic. 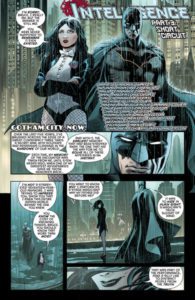 This incarnation of Azrael is really leaning heavily on the technology of his suit and sword, which makes the supernatural moments feel awkward. Considering that Ascalon is essentially a new brainwashed version of Azrael, this would be a great opportunity learn more about their St. Dumas origins. Yet, all we are getting is a lot of setup for an upcoming tech suit battle. The character may be Jean-Paul Valley, but I’m not entirely sure who Azrael is and what makes him tick. It all feels like a missed opportunity.

The art is definitely the highlight of the issue. It’s great to see Alvaro Martinez return, he’s been my favorite Detective Comics penciler out of the rotation. For some reason, the art in this issue reminded me a lot of Dustin Nguyen, who is one of my favorite artists right now. He’s done a lot of work for DC and I believe he’s currently working on one the other Bat-books too. Loved the colors as well, specifically on the Batman and Zatanna parts.

Overall, the Azrael story is moving really slow, and what we are actually getting seems to be missing the mark. But with Ascalon on the attack, and Batman determined to delve into the world of magic, things could pick up really soon. James Tynion is such a talented writer that I have no doubt this storyline will pay off in a big way, but as of right now, it’s not quite what I had hoped,