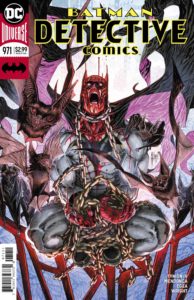 The Victims Syndicate have made their move and are now in complete control of Arkham Asylum. Batman must fight them and the perception that his team of heroes are working as his personal task force.

Batman teaming up with a murderer was bound to come back and bite him. It’s no surprise whatsoever that the Victim Syndicate are using Clayface against the Dark Knight. There are times where this current run on Detective Comics loses focus due to the number of characters needing the spotlight, but Basil Karlo has had the best character arc out of any of them. He is consistently well-written and unlike past villains who have tried to find redemption and forgiveness, you actually believe him and his struggle to contain the monster within. His friendship with Cassandra Cain is the best part of the series, I just hope they never go the romantic route with them.

Have you seen this:
Batman: Urban Legends #6 (REVIEW)

Even before Tim Drake got taken out by Oz, he’s been skirting on mad scientist. Meeting with his future self-has only made his micro-managing worse, and it’s about time Batman has finally noticed. Whether his mind is just elsewhere or perhaps he’s purposely ignoring it, Bruce allowing Red Robin to go unsupervised this long has been surprising. Batman was shocked to hear that Tim reached out to the group that tried to murder him. Robin’s don’t usually like being taken to task even when they deserve it so what this leads to should be interesting.

The Victim Syndicate has turned out to be a formidable opponent for the Bat-family. Something about the Syndicate still screams C-list villains, but they have put enough pressure on the Gotham Knights that they’re starting to tear each other apart. Anarky has only made them more dangerous and Ulysses is still out and about. 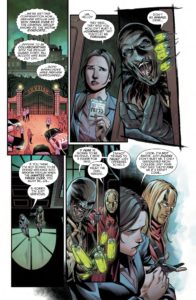 I wasn’t so big on the roundish Clayface look, so I loved the art change on this issue. It’s funny that Batman references Joker taking over Arkham Asylum because the artwork reminds me of the Arkham City series that was based in the video game. An underrated digital comic book that showcased some really talented creators. This issue of Detective Comics was surprisingly creepy at times and had a lot of fun with panel placement. I’m surprised colorist James Wright went with such a bright looking Asylum.i would have expected something a little less colorful but it worked. The issue does look great.

I love seeing villains going at heroes with their brain instead of their brawn. Revealing secrets to tear a team apart is very reminiscent of Zemo from Captain America: Civil War. Though it’s cool to see Batman blindsided for once, he has been unnaturally absent-minded in this series. Whether that has to do with his marriage with Catwoman on his solo title, or if he’s just not being diligent enough, I hope that gets explained because he’s letting a lot happen without his knowledge.