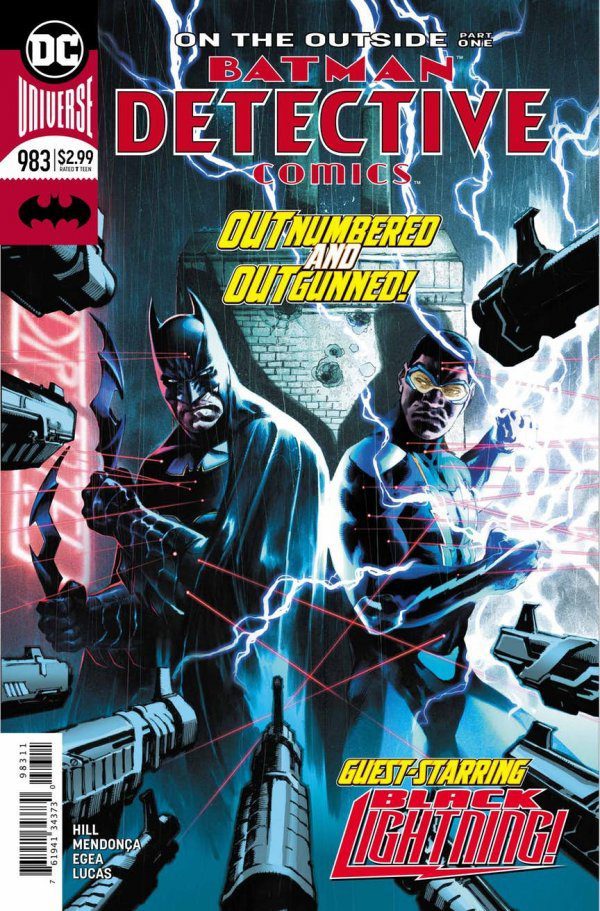 The opening pages of this issues are visceral and get the attention of the reader almost immediately, especially what happens when Duke Thomas investigates a fan of the Dark Knight and finds himself being blown out of a window. The perpetrator says something cryptic that immediately makes me think of who this might be as the story progresses.

With Superman gone, Batman turns to Martian Manhunter as a go-between for the Justice League. It seems Bruce has business in Metropolis and that business is with Jefferson Pierce aka Black Lightning. The hero himself is dealing with a hostage situation while at the same time reflecting on the difficulty of trying to save people in his other career as a high school principal. In the aftermath of the encounter, Jefferson returns to his home and is confronted by Batman who wants him to lead a team for him. Bruce’s motives are that he needs a teacher, but I think putting Black Lightning into the role of a Batman lackey is the worst thing you can do for the character.

When Bruce goes back on patrol, Alfred tells him that the drive they recovered with Duke contains an audio file. An audio file that gives information regarding the fact that this new player in Gotham knows who Bruce is and that his motives are to remove those close to him in order to make Batman stronger. It’s a motive that has played out in other stories so I find myself hesitant, but this first part of the arc is well done in establishing the threat, the limits of it, the motives as well as how much this character seems to know. Hopefully, we won’t have to wait too long before he reveals himself.