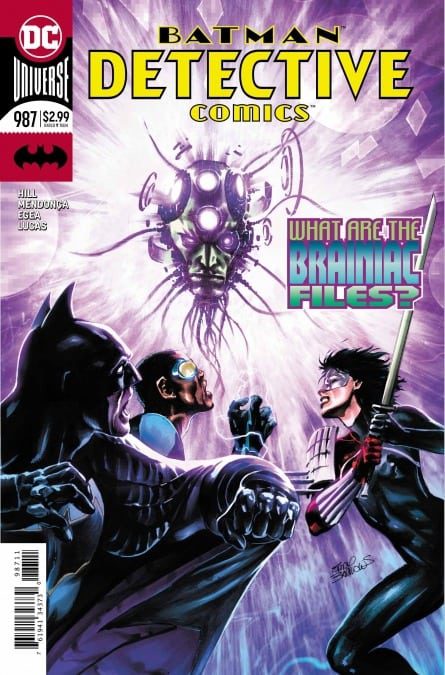 Karma has decided to begin his final gambit. In his bid to bring out the Batman that he wants to face, he has decided to hit Wayne Enterprises and take one of its employees hostage. An employee that Bruce knows personally. One with the perfect blend of honesty and personal tragedy to bring Batman running to rescue him. While Karma’s hired goons wait for the arrival of Batman, the Dark Knight and his team are tracing the technology Karma is using to enhance himself. Tech that can be traced back to Waller and the events of No Justice.

Batman wants to take on Karma alone and Black Lightning and the rest of the new Outsiders team he’s assembled are trying to talk him out of it. It’s an argument that is only settled by Jefferson himself and Batman must use an unconventional means of attack if he’s going to both withstand an enemy that knows his every move and beat an enemy of his own making.

Hill brings the Karma arc to a satisfying conclusion with this issue. From a story perspective, nothing is wasted in this issue. Everything flows well in the story and every character gets their moment. What also makes it work is giving Batman back a measure of the darkness that threatens to consume him. Hill also manages to craft an Outsiders team in a way that makes sense to Batman as a character and the missions he’s going to be sending them on work well with the themes of No Justice and its aftermath.

Mendonca has some great art in this issue with great facial expressions from the characters as well as awesome action beats. The art really complements the story and there are definitely some emotional moments that can only be depicted visually in this issue and the art nails it, especially in the final confrontation between Batman and Karma.