Maybe it’s just me but I love cute superheroes. Marvel, DC, Horror whatever, whenever my pop culture icons it cutified I can’t help but take an interest. Diamond Select’s Minimates and Vinimates line continually feeds my addiction for the heroically adorable. There recent Vinimate offerings include icons midsized, blocky versions of the DC Universe’s Flash, Supergirl, Green Arrow, Shazam, and the villainous Darkseid. Each figure is unique, subtly detailed and appropriately delightful. Vinimates are definitely a uniquely styled figure and if you aren’t into their shape and soft detail then, there is no winning you over but for fans of the Minimate or Vinimate line, these DC Comics titans are certainly worth the purchase price.

Green Arrow features his classic elfish inspired costume as he wields his trusty bow, aiming his iconic boxing glove trick arrow. The green’s of his costume are perfectly balanced and really allow his golden locks and goatee shine through. Personally, I’m not a sure fan of the emerald archer but even I have to admit this is a flawless piece that perfectly represents the character and his comic book roots. With a cool and calm expression, as he pulls back the string to his bow, Oliver Queen’s Vinimate debut is a direct walk into the hall of fame.

Supergirl features her classic costume with the mid-drift and skirt. She is posed in the heroic landing position as her cape flows behind her. Despite some smudgy paintwork on the cape as it touches the shoulder, this piece optimizes Kryptonian heroism. The colors of her costume really pop and the flowing nature of her skirt and cape give the added detail of motion, giving this blocky figure that needed focal point to really set it apart. The classic look suits this figure well as any Supergirl fan would be happy to have this heroine on display.

Out of all these figures, the Scarlet Speedster is probably my favorite. There isn’t anything I don’t like about this design. The metallic red paint job is a wonderful touch that allows different shades of crimson to shine through under the light. His pose is protypical Flash and I love it, his fully frontal displayed as he slides to a stop, with his signature yellow lighting trailing behind. It’s a wonderful figure that puts a smile on my face every time I look at it and it would, of course, make an excellent addition to any DC Fans collection.

The Shazam Vinimate is certainly the most unique and expressive of the bunch. With the appearance of being mid “Shazam,” Billy Batson is eyes closed, and yelling as lightning strikes his chest. Its an ambitious pose for a figure like this and I’m all for it. Again the colling and detail of the suit is spot on, and without the unique visceral pose, this would be hard to differentiate from the Superman or Supergirl piece. SHAZAM is loud and proud and it’s awesome.

Last but certainly not least is the villainous Darkseid. The ruler of Apokolips features his classic design and coloring with his outstanding feature being his prominent brow. Standing in an imposing manner, seemingly forcing his will over whoever is nearby, this figure is certainly menacing by lacking compared to the superhero counterparts. The bright blues and dark greys provide a great contrast and this version of Darkseid certainly looks great, he is just missing that extra something special to really put him in the same class as the others in this article. Unfortuanley he just looks boring.

These DC Vinimates are a cool little addition to any desk or display case. Our heroes especially stand out with bright colors and dynmaic poses while our villain just misses the mark thanks to a lackluster design. Despite some minor flaws, these are great pieces for a starter collection or just decoration. 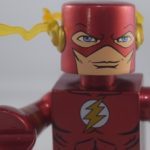