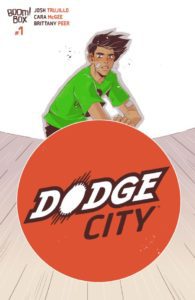 In 2004, Ben Stiller brought us the comedy classic Dodgeball: A True Underdog Story. I believed that a finer medium could not be found for the sport. Fast-forward 14 years and things have only gotten better for the fans of this underrated game. BOOM! Studios has borrowed Josh Trujillo from their Adventure Time series and teamed him up with Cara McGee from Over the Garden Wall. What else could we expect except magic?

Our main antagonist is the newest citizen of Dodge City, Tomás. All he wants is to fit in. When one lives in a city named Dodge, dodegball does seem like the most logical choice. He decides to join the Jazz Pandas, a real 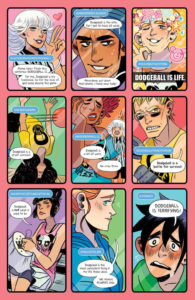 underdog team if there ever was one. Their streak is 0 - 15, for those who do not do sports, that is 0 wins and 15 loses. I enjoy the pace of this comic and the fact that we do not have to wait until issue 2 to know if he makes the team… he does.

One of the great things about this comic is the representation it gives right off the bat. Tomás speaks in Spanish without getting translated within his speech bubbles. Huck is a deaf player who gets treated no differently than anybody else. Drew and Elise may be in a lesbian relationship, only time will reveal this. And Amardeep plays in his dastar. This is a team where everybody is accepted. I am looking forward to the cast of characters from other teams.

If you are not sold on another dodgeball story, do not worry. This is going to be a series with a lot of heart and external stories going on as well. The sport is simply a way to put a group like this together. The writing is excellent and the art is beautiful. I imagine that it is very difficult to draw action, but Cara does an amazing job. The best part about this series is that you do not even have to have ESPN Ocho to enjoy it!!