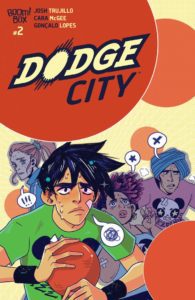 There is a stir in the air, things are changing for the Jazz Pandas. Worry not for our underdogs, these changes may be for the best. We got introduced to the team, and saw a change in command in issue number one . Now a new member is possibly joining. I could go on and on about how I do not want to spoil the ending for you. I would do the “click bait” thing and say, “You’ll Never Believe What Happens!” (The second option will never happen on one of my reviews.) This time I am going to spoil things. Chase, Judy’s brother, joins the Jazz Pandas by the end of the issue.

The mini-arc very predictable and that is why I chose to spoil things. Maybe it is because I watch too much television or read too many 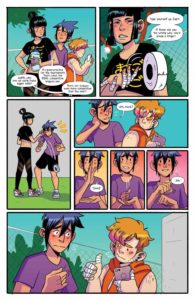 comics that use similar tropes. From the moment the character is introduced and we see the tension between him and Judy, I knew he was here to stay. In a way I am glad they did they did this very quickly. There are not many things worse than waiting for something big and surprising to happen and then it end up being minimal. Now that the sibling rivalry has been established and Chase is on the case… sorry, I have a 5 year old who loves Paw Patrol… Chase is on the team, we can dig into the real story.

I am very interested to see how our team here will fight its way through the Championships. It would be easy to assume that they are just going to plow through the other teams and rise to the top. I do not see it being that easy for them. This is a team that has been through a lot before it came to the page and I guarantee there will be more reveals that bite them in the butt in the future. Josh Trujillo has a way of writing dialogue that really makes you believe in these characters. Combine that with that the artistry of Cara McGee and Gonçalo Lopes and you have the making of a T.V. show worthy comic. I already have so many unanswered questions, is it next month, yet?