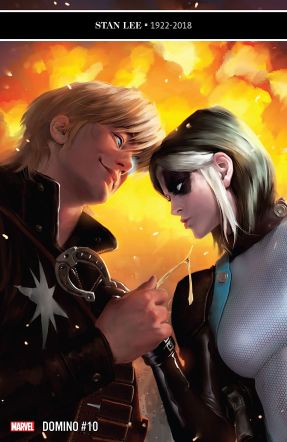 If Atlas Bear charging out from a burst of flames after her moment with Longshot in Domino #10 doesn’t give you goosebumps, well, then I’d be curious to know what does get your juices flowing. This kid has had quite the transformation over a short bit of time. She’s quickly become the second-best character in the Domino run. It wouldn’t surprise me if she was the main reason—other than Gail Simone and David Baldeon dominating this series—Domino is getting an extended team in Domino: Hotshots. Bringing on Black Widow and White Fox is great, but Atlas Bear needs to be at the forefront of the miniseries. (And it was a nice touch by Simone to include an application from Shoon’kwa to join the trio.)

Now, as much as Domino apparently, “saved the entire human race,” according to Atlas Bear, it was really the other three heroes—not Longshot, his allergies were acting up—who had the best moments in Domino #10. Obviously, Atlas Bear’s motivation from her interaction with Longshot. Outlaw not only knocked Atlas Bear out cold, but she also pulverized a gigantic, alien metal door. But she was at her best bullying the Planet Orphan scientists. Diamondback may have had her best moment of all the 10 issues of Domino in this issue, too. It really seemed like she gave the Trashman one of her actual diamonds. In a situation like that, you have to make sacrifices. Not Diamondback though. She wants to have her cake and eat it, then blow everyone up that tries to take her cake.

The only real issue with Domino #10 is there are too many artists involved in this. Artist changes happen all the time, that’s understandable; obviously, business decisions have to be made—even when though some of them aren’t good. But was it absolutely necessary to bring in three artists in addition to David Baldeon? He’s done an awesome job with Domino and her teammates. Was it because they went from Earth to outer space? That’s obviously where the transformation happened but seems a bit forced. This isn’t a criticism of the other artists, it just seems like whoever made this decision tried to do too much. For something like Domino Annual #1, it makes sense because it included multiple short stories. In this case, though, it just didn’t sit well.