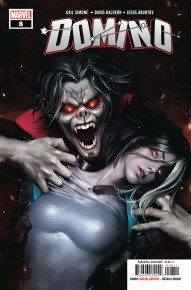 Good guy or bad, we found out in Domino #8 he can be pretty ungrateful. Poor Domino offers up her blood and he complains because she’s not “pure human stock.” There’s a saying about beggars not being choosers that applies here.

And he could try not being a jerk, too. That never hurt anyone.

Also, aren’t vampires technically mutants in the Marvel Universe, too? (Pretty sure that was the case in X-Men ’92.)

Either way, Morbius changed his tune pretty quickly once Domino showed he wouldn’t put up with him. Dominant Domino is the definitely her best self.

He made it clear again on the train he’s only helping in the fight because it serves his agenda. Which surprised Domino, Outlaw, and Diamondback for some reason? Did they experience a neuralyzer mind wind somewhere and I just missed it?

He’s a vampire. They’re all about themselves. Unless they’re from Twilight, that’s pretty much how it works.

Speaking of mind-wipes, how does Domino not know who Longshot is? He’s obviously not a premiere X-Men and was never a member of X-Force, but they had to cross paths at some point, right? Even if they didn’t, they hang out in similar circles. Enough that she should know his name.

Going back to Morbius feeding on Domino, I will say, I think David Baldeon’s best panel was when Morbius released Domino, spraying her blood everywhere. Though, their fight right before Morbius gave Domino the harshest hickey ever was done well, too. Wasn’t a huge fan of the underwater vampires. They were pretty weird looking, which is probably what Baldeon was shooting for.

Gail Simone’s story continues to go in different directions, but I love how this band of three still finds a way to keep it light at all times. Domino keeps getting better and better.