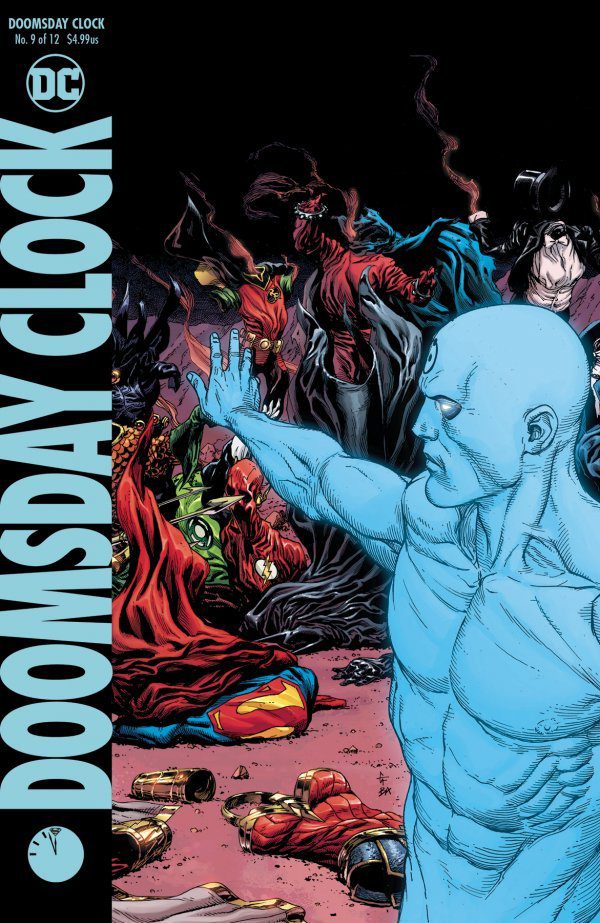 His presence discovered and his plans unfolding, Dr. Manhattan stands on Mars and waits.

He has altered and manipulated events across time in this new universe and Manhattan has come to a moment where he can only see one possible ending. An ending that sees Superman flying towards him in a rage.

In the aftermath of the attack on Moscow, the world is turning against metahumans. Batman has been taken to the cave to heal from his injuries, Superman is in a coma and the Justice League, Doom Patrol, Green Lantern Corps and a host of other heroes have discovered the source of the attack and are on their way to Mars.

Manhattan is having trouble seeing both the past and present in the aftermath of an explosion on Earth and it is causing him to have conversations from alternate timelines. As tensions mount on Earth, Bruce tries desperately to contact the heroes on Mars because they are all wrong. Lex Luthor comes to see Lois with information that can help Superman.

When the heroes finally confront Manhattan, they find him confused, but curious about their powers as he easily takes them down group after group from both science-based powers to magic. In the midst of the battle, Firestorm learns a tragic truth about his past and both Batman and Wonder Woman are at the mercy of Black Adam’s forces on Earth.

Geoff Johns is bringing everything to a head with this issue. The dialogue gives clues to where the story takes place in the DC universe as well as hints at other storylines happening including a connection to Wally West. I’m impressed with the pace this story is laid out in. It allows for moments of intrigue, mystery, action, and thrills throughout. The action scenes were epic and I loved the references Guy made to previous arcs including a reference to Metal.

Gary Frank’s art is magnificent. There are so many great moments throughout this issue and it all starts with the impressive lineup of characters that he draws traveling to Mars and culminating in an epic battle between the heroes and Dr. Manhattan.