Released in 1987, Triumph And Agony is the fourth studio album from German heavy metal titans WARLOCK. The record was a mammoth success globally with hit singles and MTV’s Headbangers Ball favorites “All We Are” and “Für immer” among other now-pinnacle anthems like “East Meets West,” “Metal Tango,” “I Rule The Ruins,” and “Touch Of Evil.” Triumph And Agony stands among heavy metal’s true cult classics. 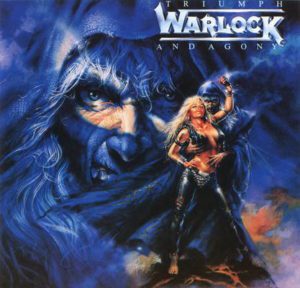 Three decades later, the record has lost none of its charm. In honor of its 30th anniversary, this September, WARLOCK vocalist Doro Pesch will, for the first time ever, perform the fist-raising full-length in its entirety on two European festival dates this Summer and a special run of US live performances. Joined by original Triumph And Agony guitarist Tommy Bolan alongside bassist Nick Douglas, drummer Johnny Dee, guitarist Bas Maas and guitarist/keyboardist Luca Princiotta, Pesch will hit Worcester, New York City, Detroit, Chicago, and Los Angeles.

“Triumph And Agony was our breakthrough album in America,” issues Pesch, “and it’s still one of my absolute favorites! I’m so excited to play some of these songs for the first time and I’m so much looking forward to play with Tommy again. I’m sure it’s gonna sound great and we’ll put on a killer show.” 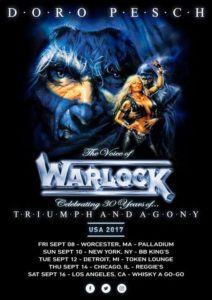