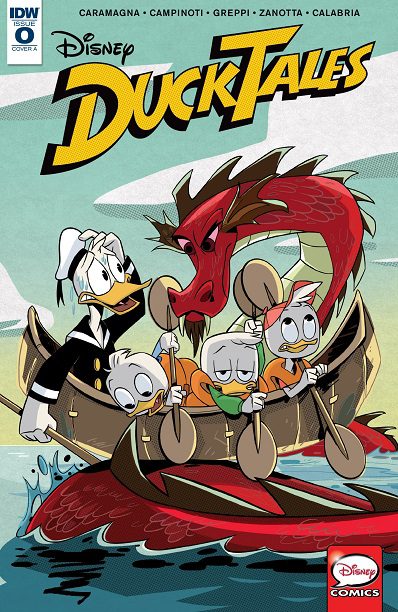 What does ID’s #DuckTales #0 have in common with #SouthPark and #FamilyGuy?

The Duck Tales comics 2017 preview kicked off with Donald Duck screaming his way through two short-stories packed with cuteness and bad behavior from his three iconic nephews. Duck Tales was one of my favorite comics and shows in the past and this revamp promised to offer a fresh look at my old friends without feeling like a complete rehash. I felt like someone should have a running tally of who had more jobs: Donald Duck or Peter Griffin? Peter may shift professions more frequently through cutaways but Donald has several decades of a head start! And even after his first appearance in 1934, Donald has managed to stay relevant, hip, and quack-tastic for young comic book readers with two short stories combined into one book by Joe Caramagna.

As usual, Donald’s blue collar attitude was interrupted by the scheming of his three nephews. I loved the updated looks for Huey, Dewey, and Louie with the larger, rounder, heads. They kept their familiar color schemes but the outfits were changed to offer a sense of individuality that wasn’t present in other stories. The innocent, but mischievous, trio’s designed felt reminiscent of South Park kids or POP Funko figures. Both just happen to combine two of my favorite things, so SCORE!

Have you seen this:
Detective Comics #1029 (Review)

Donald maintained his classic appearance still dressed like a sailor. After all these years, he’s still managed to maintain a G rating while running around without any pants. In the “A” story he finally put some of his implied nautical skills to use as a tour driver for a boat. I liked the annoying member of his party, Dr. Ruffalo, that felt he knew every trivial fact about the Little Lake. His know-it-all attitude probably reminded me a bit of…myself. (Imagine that!)

The B story, “The Repeating Revenge of the Screaming Duck!”, saw Donald in another career change as the caretaker of a spooky old hotel. Donald’s endless string of bosses must be very generous or simply disregard liability laws to allow him to bring his three nephews on every job. I loved it when they met a character of pun-tastic proportions, Mallard Hitchcock. This tale carried the meat of the book and allowed the personalities of the three goslings to bounce off one another. DDeweyproved himself to be the thespian of the group while Louie was a shrewd negotiator and by far the most street-wise of the three.

The art was crisp, the dialogue witty, and the entertainment value high as this run of Duck Tales took off quacking and flapping into a fresh run with talented writer Joe Caramagna. I look forward to reading these volumes to my son as well as seeing familiar bills in the expanded cast of the Duck family such as: Scrooge, Launch-Pad, and my favorite of all: Darkwing! If the first run of this book is any indication, these inevitable reboots will be a must-see for new readers and old millennials looking for a shot of nostalgia.

Find @JSandlinWriter on twitter and check out my book: OUTBREAK MUTINY. Alternate History. With Superheroes. On AMAZON NOW: https://www.amazon.com/OUTBREAK-MUTINY-Novel-Comics-Sandlin/dp/1521106673/ref=sr_1_1?ie=UTF8&qid=1500588286&sr=8-1&keywords=outbreak+mutiny