First of all, let me say that this is my very first review for GWW and it will take some time to find my gauge here so I may skew a little critical on this one. Dungeon Rushers is not a bad little game but it is a little game and the folks at Goblinz were maybe a little ambitious in trying to squeeze as many hours out of it as they did. Playing on the Switch, as I did, it makes a little more sense as you are able to pick up and play at your leisure. It also makes sense that this game is available for smartphones, as that seems like the most suitable platform. Playing this on a locked down console, always on a big screen would seem like overkill and eventually too much of a drag to waste valuable couch time on.

Graphics and sound are simplistic but actually fairly elegant in their presentation. I didn’t mind the overall old school tone and approach of this game, even if its scale was a little too big for its britches. Combat is extremely straightforward but also balanced and fair. If you have ever played any turn based RPG you should be able to wrap your head around this combat system pretty much instantly. There is no VO so all dialog is text-based but there isn’t much and what there is stays pretty loose and endearingly silly.

The narrative of this game is as simple as it gets; boy joins a dungeon crawling guild and starts crawling dungeons, making friends and earning treasure along the way. This may be a put-off to some, but these kinds of games are fairly addictive and sometimes you just wanna get a quick rpg fix without diving into a whole complicated narrative. Dungeon Rushers fills that gap in the market quite competently.

Navigation of the main world and dungeons is all done on a grid with your party represented by a token which moves cell by cell. This approach took some getting used to but I quite enjoyed the simplicity of it. There’s also a very basic crafting system that contributes to the addictive quality of the game. You won’t find anything new in any of these features, but you shouldn’t expect to with a game like this. Still, the systems are handled well enough.

I did run into a few pretty glaring technical issues throughout my time with this game. My game crashed on me twice within my first few hours with it, which may be a Switch-specific bug that will get worked out, but I lost a little progress each time which was annoying. I find some of the fonts a little bit small on handheld, but that didn’t really cause me any actual problems. The game held up ok on the 55-inch TV but it’s definitely the type of game you will spend a lot more time with when you’re mobile. Music is pretty “meh” with a looping track that cuts off suddenly each time it repeats. Might be a good idea to provide your own soundtrack for this one.

I wouldn’t say the game is very  challenging but it isn’t too easy either. It takes forever to level up but, as cheap as it is, I have to admit that added to my overall satisfaction when I finally did level. All-in-all, Dungeon Rushers might not be the prettiest or smartest or most fun game in the world, but if you need something simple that you can turn your brain off and enjoy casually, it may be just the game for you, as long as you’re good with potential occasional crashes. 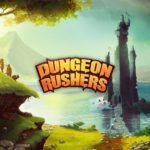