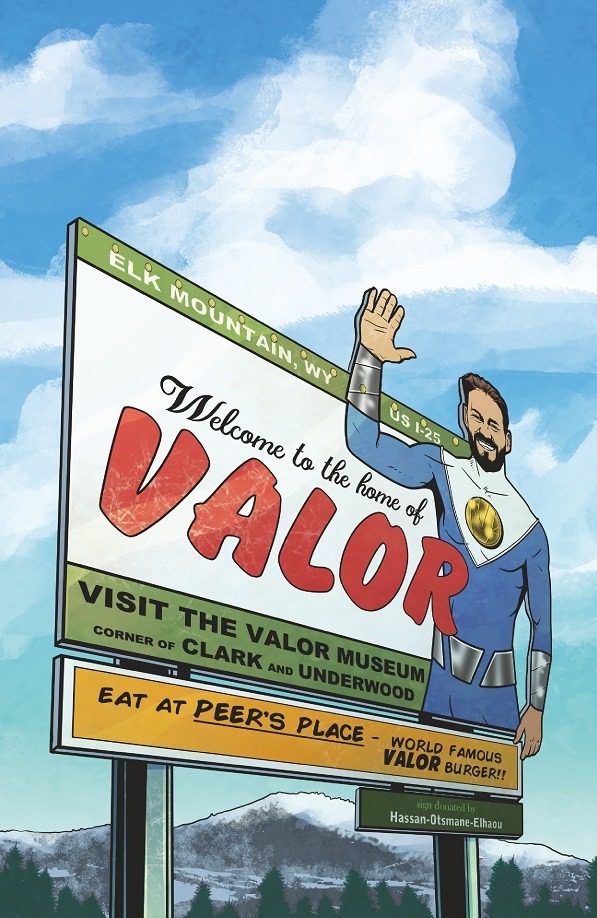 At first when Geeks Worldwide was approached by writer Jordan Clark to review his new crowd funded comic there was some speculation about the content of the book. I read the email which contained a summary of the issue and it read as follows:

“It’s called Elk Mountain and follows an immigrant superhero named Valor trying to find the best way to help as families continue to be separated and children detained.”

My knee jerk reaction was negative. I thought that this was going to be a politically based comic, heavy on social commentary; the Left’s equivalent to Comicsgate. But then I read the comic itself and everything changed. Elk Mountain might be one of the smartest and brightest Indy comics to come out this year. This isn’t just a brilliant analysis of today’s politics, but a smart superhero comic book that takes some HUGE risks with its storytelling right from issue 1.

The book stars Valor, a Superman type of caped do-gooder. Valor is introduced in the traditional heroic role. He stops a bank robbery by a D-list villain, and receives the key to the city from the mayor. Where Valor and Elk Mountain deviate from the norm is that Valor sneaks out and recovers illegal aliens and brings them to the sleepy little town of Elk Mountain. Because of the heroes action the town has been designated a sanctuary city and has fallen victim to the scrutiny of the United States government.

But here is where Jordan Clark shows more gravitas and creativity than most superhero titles that you will read this year. During the celebration Valor is notified that there is an alien spaceship orbiting Earth. The hero immediately takes flight and confronts the oncoming threat, there is a fight, and then in a flash of light Valor, the aliens, and the certainty of Elk Mountain all disappear.

The town of Elk Mountain awaits his return. One day passes, then two, then a week, a month…
seven months pass before the townsfolk of Elk Mountain give up waiting for their hero to return and that is where this title kicks into overdrive. It’s the regular everyday people that we met at the beginning of the issue that become the focus of the story. The bartender who was Valor’s best friend and knew his “secret” identity. The mayor who is forced to keep the town together in the face of extreme adversity. The sheriff who now has to reestablish himself as a the face of the law and a leader of the resistance.

What resistance you ask? Well, when Valor disappeared those harmless D and C list villains suddenly weren’t so harmless anymore when left unopposed. The bad guys team up and take over the town. While the cats away…

It falls to common everyday citizens to fight and retake the town. With the help of a group of illegals that Valor had been harboring in his own secret HQ, the issue ends as the good people of Elk Mountain prepare to go toe-to-toe with the villains.
Meanwhile, somewhere deep in the heart of space, a familiar face is ready to come home.

This little comic is the perfect calling card for a new voice in comics. Clark has taken all the traditional superhero troupes that readers are used to and puts a fantastic slant on it. By removing Valor from the issue it forced readers to identify with the remaining cast, and suddenly the book went from typical superhero fare to a book with a ton of heart and soul. This is superhero comics done right.

It’s Smallville if the town had to take on Superman’s rogues gallery without depending on the Man of Steel to save them. It’s a depiction of bra 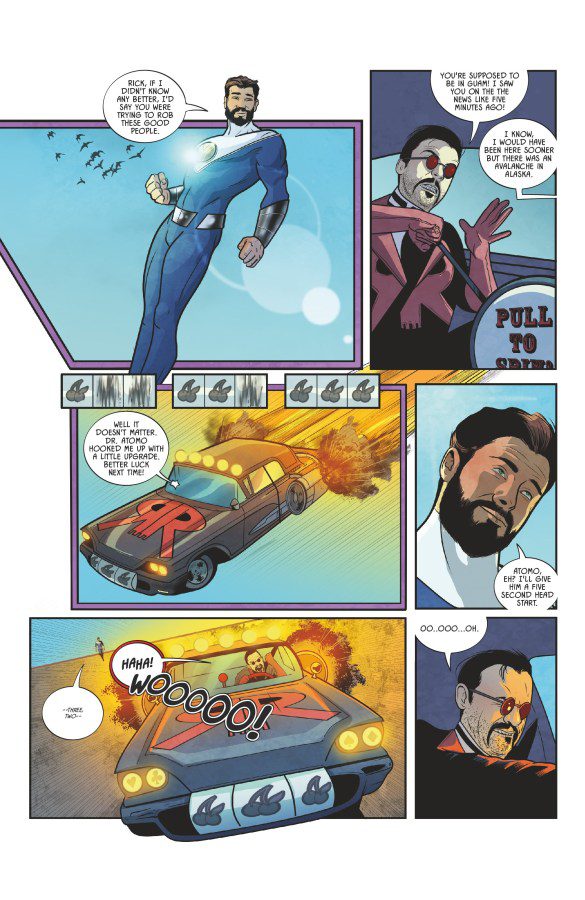 very from the common man. How even the weakest of us can show amazing strength in the face of adversity…but all wrapped up in a fun to read comic.

There is a political side to this comic. I’m not going to avoid that element. Clark is bringing attention to the issue of sanctuary cities and illegal immigration. Valor is a Superman stand-in, and shares a similar origin. He is a refugee. He is the ultimate illegal alien. And because of this Valor risks pissing off the government to help those who illegally cross the border by bringing them to Elk Mountain. While this is not the focus of the issue or the series it is an ongoing side-plot that is present. Not everyone will like having this issue in their comics.

It is my own personal opinion that Clark has done what Marvel and DC have failed to do. He has tackled a current event, taken a stance, and went on to create a compelling story around his own opinion. He doesn’t preach his political point of view, he is not beating the reader over the head with it, it is simply there; take it or leave it, and there is plenty more to latch onto in this book if you don’t agree with the writer’s stance on this one topic.

As for the art team. Underwood’s art style is a hybrid of Kevin McGuire and Photoshop filters. As much as that might sound as a slight against the artist, it’s more of a compliment as the distinct art style helps and hinders the book. There are panels were the anatomy of characters and their facial expressions are perfectly captured and so true to life that you have to stop and appreciate their beauty, whereas there are other panels where the poses and placement of characters come off stiff and wooden. There becomes this odd balance throughout the issue of great to average art that gives the book a unique look and adds and unusual feel to the story. It’s comfortable yet something all together new.

The colors and letters in this issue are hit and miss as well. You can tell that these are young artisans in the early stages of their craft. Again that might sound like a slam against the hard work and dedication that these talented individuals devoted to this issue, but it is not. It is merely observation. There are points within the issue that I’m sure in another five years that Peers and Otsmane-Elhaou would like to execute differently.

There are panels where the lighting and the saturation of color are unbalanced or unnecessary. There are too many panels in a row with no backgrounds. While the story calls for a conversation between Valor and his best friend, the lack of backgrounds make the pair seem like they are talking in a formless void. I’m not sure that the blame for that falls squarely on the shoulders of the colorist or the artist, but the detailed work that needed to be done on some pages was not and the book suffers because of it. There are also sound effects that were not colored in correctly and seemed rushed and blurred; while this didn’t ruin the reading experience, it did stand out and that’s never what you want.

I think that this is a young group of creators that are learning their craft, and learning how to work together for the first time. There are mistakes and cracks within the creative process that can be corrected moving forward. If this group was able to stick together over another six or seven issues I think that this title would look much sharper and more professional.

That being said, the story and the concept are strong enough to cover for these minor missteps. There is a lot here to like. The entire creative team should be proud as they have created one of the smarter superhero Indy books to come out in recent memory, in fact the title that I kept flashing to in my mind was the early issues of Invincible. There is that same level of promise here. While the style and content are very different from Robert Kirkman’s superhero classic, it holds the same level of early promise. The promise to provide smart stories, well crafted characters, and a unique style that sets it apart from the onslaught of other superhero comics. This is a very solid debut. I highly recommend this comic.