The GCHD gets an upgrade with the Mk-II.

Since its release in early 2018, the GCHD from EON has been the must-have accessory for the Nintendo GameCube. Back in April, The GWW noted that the GCHD’s ability to upscale the GameCube’s output will breath new life into the retro-gaming community. It appears fans held the same sentiment as the device has taken ahold of the Super Smash Brothers world and helped EON, a three-person operation, in bringing a new iteration of its flagship project. Check out the announcement trailer for the Mk-II below:

The GCHD Mk-II will available December 2018 for $149.99 USD, the same price point of its predecessor. The newly upgraded units will feature: 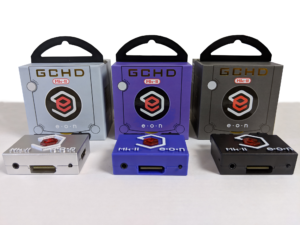 For retro gaming collectors, the GCHD is the perfect way to experience the GameCube library without a CRT. For years, the ability to display video beyond the OEM output has only been possible via the GameCube component cables. The problem with this is the rarity of the cables themselves. Nintendo only produced the cables for a short amount of time and they were only available via a mail order special request, causing them to be astronomically expensive in the retro collectors market (a set of GameCube component cables will cost you upwards of $250). Furthermore, the ability for third parties to manufacture the chip was rendered impossible due to a special DAC chip that was in the plug base.

EON is committed to evolving the retro gaming scene through high-quality products. EON’s ongoing relationship with the esports community propelled the GCHD into the Melee a major scene, earning invitations to Shine and Heir 5 in London. EON also continues to support local tournament scenes and enthusiast events around the world, including a massive showcase
of over 40 setups at the Portland Retro Gaming Expo and similar showcases at Classic Games Fest in Austin, TX, PAX East in Boston, MA, and the Long Island Retro Gaming Expo in New York.