With season two less than a week away, some of the ‘Titans’ cast members are sharing their excitement.

In a comment made in the Titans Facebook group, Deathstroke actor Esai Morales spoke about inhabiting the role of the iconic DC villain.

‘‘I am both thrilled and honored to inhabit the character and supersuit of Slade WIlson/Deathstroke. I am having the time of my life in the role for a variety of reasons but mostly because he’s just such a badass and very much willing and able to take on all comers to protect his family and his reputation at his craft. Thank you all for such a warm and lovely welcome. I can’t wait to see what you think. ??‍♀️’’ 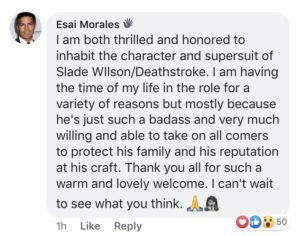 Deathstroke will serve as the main antagonist of ‘Titans’ season two after the Trigon storyline is quickly wrapped up. His children, Rose & Joeseph Wilson, will also be featured.