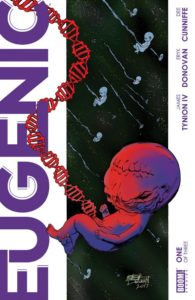 The Mississippi Delta Virus has decimated the world, but thanks to Doctor Cyrus Crane a vaccine has been made. Unfortunately, the cure has its side effects.

Even though this comic book is a “sci-fi horror,” I can honestly say that I didn’t expect it to make me feel so uncomfortable. It wasn’t even the look of the monstrous babies, it was the ideals of Cyrus Crane. In a benevolent light, he can easily be seen as a hero willing to sacrifice for the good of humanity. But as you go through the first issue, Crane sounds more like a mad scientist. The controversial nature of his decisions should have been expected given the title of is series. The talk of eugenics always leads to something disgusting, yet James Tynion tackles the concept in a science fiction setting pretty well. It’s disturbing, but it’s not distasteful.

Eugenic #1 is a prologue and a setup to a completely different world in the next issue. The creative team has already announced a new group of main characters, which shouldn’t be a surprise if you’ve read the first issue. Seeing humanity and humanity coexist given the how humans are conceived, is a terrifying and exciting prospect. That’s where this first chapter succeeds, its ending does an excellent job of selling you on what’s to come. Admittedly, the dialogue was dense, and we spent a lot of time in the mind of a character that won’t play a big part from here on out. But the revelations and the consequences of a man willing to sacrifice a human’s uniqueness to eliminate their prejudice should hook anyone. 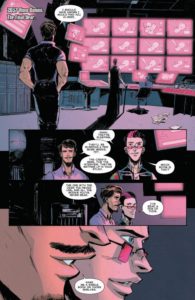 The artwork was fantastic, especially the characters. They didn’t look like anyone we’ve seen before, and that includes the mutant babies, which are really creepy. It’s hard not appreciate the look of this comic book after reading artist Eryk Donovan’s breakdown of how he went about designing everything. I appreciate the mixing of contemporary and future elements, it made this world feel vibrant and unique.

There are some touchy subjects being addressed here, but James Tynion is a great writer who has earned my trust. Most of this issue won’t blow readers away, but the world-building is more than good enough to bring you back for another go. I’m surprised this is listed as a mini-series, it has the potential of being a long-running sci-fi drama. It’s early but three issues already doesn’t seem like enough.