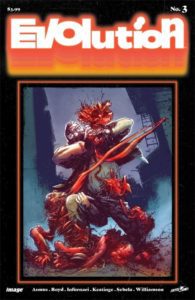 A sickness is changing people and no one knows exactly what’s going on. The mystery of the oncoming evolution unravels in three different storylines.

Looking at the preview pages for this series I assumed it would be horror related, but I wasn’t expecting body horror. That sub-genre isn’t normally something I’d be interested in but the mystery unfolding in the past few issues has caught my interest. Admittedly, the revolving storylines make it a little harder to remember something as simple as a characters name, but as you jump back into an individuals story things start to become more clear. If this series were a roller coaster then this issue would be the equivalent of reaching the top of the track. Things still moving at a methodical pace, but the drop doesn’t look pretty for any of the characters. Right off it feels like Evolution is tapping into The Walking Dead’s “no happy endings” approach. Each life is a car wreck you can’t look away from and right now I can’t get enough of it.

With a body horror comic book you’d expect some twisted artwork, but a lot of the imagery in. Evolution is truly terrifying. Claire and Rochelle finally got to see what was on Mr. Hurwitz’s film, and it was disturbing. Joe Infurnari did his best to make each blood filled panel tough to look at. Kudos to Jordan Boyd for really setting the tone of the entire series with his colors. A lot of darker shades in use, even in the daytime. This comic doesn’t let up and keeps you in perpetual unease.

The first two issues of Evolution blew me away, but this third one didn’t quite reach that level, though still quite good. No huge revelations, but we get a peek at four different lives that are on the verge of changing forever. Evolution is as captivating as it is disturbing.