With Excalibur #1, Tini Howard has laid the foundation for six mutants to take part in a multi-layered adventure.

Although the mutants have found and developed a save haven in Krakoa, there’s still work to be done. But there are still forces working against the mutants as they look to carry out their work.

As Howard brings the six mutants together under one effort, we see where each is in their life before they are called to work together toward one goal.

Two things stand out with Marcus To’s artwork in Excalibur #1 — outside of his linework, which, above all else, defines each character’s face sharply, even the women.

First, several of the characters deal with a significant level of uncertainty, for varying reasons. There’s little doubt about that throughout the issue because of their facial expressions and obvious body language.

Second, there’s a lot of emotion in what fighting there is in Excalibur #1. The main characters are experienced fighters who are usually quick and efficient with their movement. Instead, they make sure to put a little more power behind each movement, which was a decision that needed to be made by To in order to further the story.

Howard and To are off to a strong start. Based on the start to the series, Excalibur will appeal to Psylocke, Rogue and Gambit fans, particularly.

(WARNING: Spoilers for Excalibur #1 ahead.)

To’s best work throughout the issue — which couldn’t be addressed in the spoiler-free section — is Psylocke as Captain Britain. She has such a commanding presence because she’s experienced a transformation, but she’s still Betsy Braddock, who happens to be in a weird place. So while her outfit, pose and facial expression demand respect, her arm gesturing toward Rogue shows she’s still very much the same person she’s always been — and very much confused about her situation at the moment.

READ THIS
Exclusive DC Preview: Wonder Woman: Come Back to Me #5

Moving back to Howard’s writing, she knows when to pick her spots with jokes. I hope Apocalypse requesting others to called him by his new Krakoan name becomes a reoccurring thing.

Also, she gave a subtle nod to the Mr. and Mrs. X readers when she brought up Rogue’s power-dampening bracelet. As someone who enjoyed those series, that was very much appreciated. 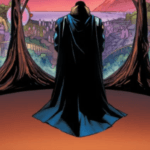