With DC Universe’s ‘Harley Quinn’ having just aired its first season finale, we thought it would be a good idea to sit down with showrunner Justin Halpern to talk about how this wacky take on the clown princess of crime came to fruition. Go on a ride with Emre as he talks with Justin about the trials and tribulations of bringing Harley Quinn to the small screen.

Emre Kaya (Geeks Worldwide): Who is your favorite character? Which character do you like to write for the most?

Justin Halpern: Oof, that’s a tough one, and I think the answers change from episode to episode. I genuinely love all the characters on the show. We try to never write characters we don’t love. We had a character who was involved early on in the show but we couldn’t really find what was exciting and meaty about the character so we cut it. So, all the series regulars I love. And the recurs all have a special place. Kite Man, Bane, and Queen of Fables were favorites in the writers’ room of the recurring characters.

GWW: Have you guys already thought of some characters you want to introduce next season? Any very obscure or niche ones in mind?

JH: Well, we’ve already completed the second thirteen eps that will air hopefully this year at some point or maybe next so I can tell you some! Catwoman is going to be in it, Batgirl, and then yeah we toss some randos in there. We take a trip off-planet for an episode so you might see some faces you normally wouldn’t. I’m trying to think of a super random one. Oh! Doctor Trapp. I defy even the most hardcore DC fan to know who Doctor Trapp is. GWW: I have no idea who Doctor Trapp is so I think you’re right.

JH: He’s a big part of an upcoming episode in the back thirteen! It’s fun to use deep dive characters because when you’re a comedy, there’s something inherently comedic about doing a superhero show and using characters that think they’re badass but are really just nobodies.

GWW: I’m sorry but I have to ask this: Harley and Ivy. Are they ever getting together? You guys have been teasing it in interviews before, can we expect this in season 2?

JH: We have caught a lot of heat for not having them together right away, and I get it, but our thinking was we didn’t want Harley to jump right back into another relationship when she was on a journey for self-discovery. That felt like selling out her character.

And for Ivy, we felt like it was important for our version of the character, who has a bit of social anxiety and neuroses and scars from her life (we get into that more in upcoming eps), to operate from that place at first. When you are emotionally hurt and haven’t dealt with your issues, you don’t always pick the best partner for you. In fact, most of the time you pick the wrong one. So we felt like both of these characters needed to go through some things emotionally, and grow as people before they would be in a place where they could really and truly experience a loving relationship and make it work.

Now, this is the idea that we deal with in the second batch of thirteen and that becomes about both of them seeking love. I don’t want to spoil it, so I’ll just say I think we get to the place where people want us to get to, but we do it carefully. We’re not trying to bait anyone or tease anyone. We pay off things off in a satisfying way but we want to make sure we earn it. I’m sure I was evasive enough here to where I’ve spoiled it and will also get yelled at. Fun! 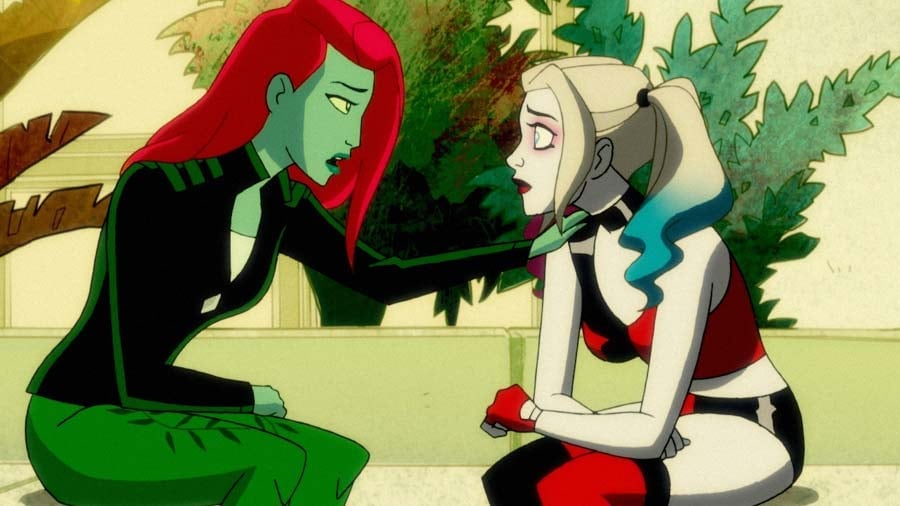 GWW: I’ve noticed that during the first season, the series brings us to a lot of cool and different places. You said before that the team goes off-planet for a bit, can we expect more awesome locations like that?

JH: Oh yeah. Aside from going off-planet one time in the second thirteen, we also go to Themiscyra for an episode and that’s probably my favorite episode of the first twenty-six.

GWW: Is it true that Margot Robbie was supposed to voice Harley early on?

JH: Not really. Margot was interested in what we were doing and we had a couple of conversations with her, but it was mostly because she was curious because they were concurrently doing Birds of Prey. So we met with her, we pitched out a few episodes to her and our general arc and she was very thoughtful and kind and just listened and that was kind of it. It wasn’t like she said no and then we went to Kaley, Margot just wanted to be informed.

I remember in one meeting, Margot turned to Geoff Johns and was like “Is this similar to what we’re doing?” and Geoff was like “Trust me, this is way way different tonally than what you’re doing,” and that was that. And I have to imagine he was right. I haven’t seen BoP, but I’m guessing it’s not as overtly comedic as our show.

GWW: Ahh, that’s fair. I’m happy she was at least interested, seems like she really likes her role as Harley Quinn. Kaley is pretty awesome too though, I’m happy she’s voicing the character.

JH: Kaley is the best. Aside from being one of the most genuine, kind, professional people I’ve met in this business, she’s so crazy talented. She can turn a joke a hundred ways and I’ve seen her do it in the booth. It’s like watching Steph Curry shoot threes, where you’re like wtf is happening here how is someone this good at this?

GWW: I’ve noticed that when Harley is near the Joker, Kaley puts up the classic Harley Quinn accent. When Harley and the Joker are separated though, Kaley just uses her normal voice. I personally think it’s supposed to show that Harley really wasn’t over the Joker yet even though she was claiming otherwise. She still tried to (subconsciously) please him. Am I just imagining things? Is this something that you guys told Kaley to do or did she come up with it herself? How did you guys come up with this?

JH: So, you’re not imagining, it was intentional. It was a joint decision by one of the EPs, Dean Lorey (he worked on Arrested Development for years and is a brilliant writer/director) and Kaley. Kaley would add so many little touches like that, along with her voice director, Charlie Adler. Like, in the episode where she went home, Kaley was like “when people go back home they slip into a thicker accent” so she did that. She’s a really thoughtful performer, which is rare. Not every actor is like that! We got so lucky with our cast. They were all just total killers. Lake Bell is one of the funniest people I’ve ever met.

GWW: I have talked to a lot of people about this show and every single one of them has said that Poison Ivy is their favorite character. She’s extremely relatable and pretty funny in a more subtle way than Harley for example.

JH: Our feeling was like if Harley is going to be out there and manic and bananas, which we really wanted her to be, Ivy couldn’t be that. We wanted Ivy to have the same amount of crazy but in a completely different way. And really when Lake read it for the first time, she informed our take so much.

GWW: Did you guys always plan for Ivy to be like this? In most versions of the character, Ivy is portrayed as a kind of seductress and/or a radical environmentalist who’s willing to sacrifice everything for nature. This is obviously not what you guys went with for the show and I understand why, but were there ever any plans to have her character be like that?

JH: We knew we did not want to make her a seductress. In our version of the show, that felt like it wouldn’t work and honestly wasn’t super interesting to us. We originally pitched this show and talked about Harley and Ivy as Ferris Bueller and Cameron Frye. That’s the dynamic we wanted. And then when Lake came on, she is so dryly funny, and so sarcastic and biting, that it just kind of rounded out the character for us. I don’t think people fully realize how good a voice actress Lake Bell is. She probably plays 50+ characters in the show (a lot of them have one or two lines) but you’d never know. She’s amazing.

GWW: How long did it take to finish season 1? Or I guess season 1 and 2 since they were produced together. I’m just trying to figure out when we can expect the next “batch” of episodes.

JH: It took forever. The writers’ room started in November of 2017. The second batch of thirteen is almost done, though, so it’s more a question of when DC decides to air them.

GWW: I’ve noticed that most of the DC Universe originals are available on other platforms besides DC Universe, the only exceptions to this are Young Justice and Harley Quinn. Do you know if Harley Quinn will be on HBO Max or Netflix, or another platform? DC Universe is only available in the US and most people who want to watch this show, can’t.

JH: As of now, it’s only available in the US, Canada, and the UK. Canada on Adult Swim and the UK on E4. I think/hope in the future it will be able to be seen by people on different platforms, but as of now, just DC Universe. Hopefully, they can expand it because we are really proud of the show and would love for as many people to see it as possible!