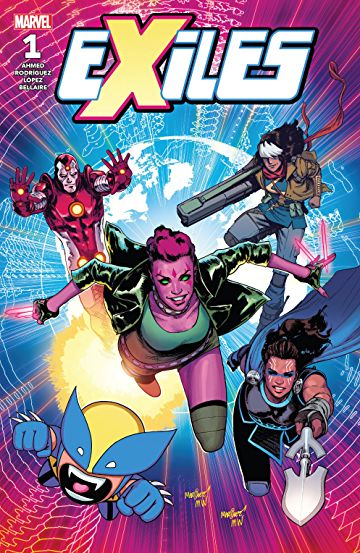 The issue starts off with The Unseen, a damned version of Nick Fury, watching as a shadow devours entire realities across the multiverse. As he watches, a younger version of himself arrives with an ancient object known as The Tallus. The device calls for Blink to come to and the object begins moving her across the multiverse in order to recruit a team to help her restore the Earth’s that were lost as well as stop the Time Eater before it destroys the entire multiverse.

The first thing I liked about the issue was that it was pretty straightforward. It didn’t waste a lot of time on an unnecessary backstory because we can get into that as the stories develop. Blink is brought in to lead the team and her naiveté is endearing but misleading and there is the hint that she is more capable than people will give her credit for. I also really like her first interaction with Khan and I really want to know what happened in her reality that makes her so angry at being called Ms. Marvel. That seems like a mystery that will play out in an interesting way. At least I hope.

Another interesting aspect of the issue is that all of the worlds that the Tallus is taking Blink to are in the crosshairs of the Time Eater. I like how this gives the member so the Exiles team motivation to stop the creature because based on the first two recruits to this team, appealing to their better natures and sense of heroics was not going to cut it. Ahmed does a great job of differentiating these characters and making their interactions with each other natural in their tension. I’m intrigued to see what the story turns into when the team gets together and I don’t want to spoil the last page, which was drawn beautifully, because it’s just too good.